“That is sad news. Have arrangements been made?”

“Yes, my lord,” Smythe said while taking the earl’s hat and coat.

Between fussing over her dogs, Ebony and Cinders, and taking off her bonnet and coat, Kate hadn’t heard what their butler related to her father, but the last words were clear. Immediately upon entering the front hall she noted Smythe stepping close to Lord Beaufort and speaking softly. Kate’s curiosity mingled with her delight of returning to Quantock Hall. Visiting the Primrose’s for Yuletide had been enjoyable, but Kate felt happy to be home.

“Katelyn, a word,” Earl Beaufort said while stepping into the west hall. He led her to the front parlour. “Mrs. Crozier passed away,” he informed her solemnly.

“How?” A tremble went through her body, from scalp to toes.

“In her sleep five nights ago. The doctor called it a stop of the heart.”

“On New Year’s… we were making merry…” Kate slowly lowered onto the edge of a sofa as thoughts cascaded together. “But she was so strong.”

“That may be, but a heart can give out for any number of reasons. She may have suffered a previous illness, or infection.”

“Or a broken heart from losing all her children and husband?”

“Oh… hmm… it’s true, some people mourn horribly and give up on life, but I don’t believe Mrs. Crozier was such a soul. Do you?”

“No, I suppose not.” Kate looked at her hands for a moment. I did see her out of breath a few times. Was that something to do with her heart? “Has she… is she still in the house?”

“I cannot say. She would have to be somewhere cold. Smythe tended to everything. I suspect she has been sent to her people for burial. At least in the winter a corpse keeps well.”

“Did she have relations?” I didn’t know much about her.

“Yes. When I engaged her, she was residing with a brother.”

“I’ll say a prayer for her tomorrow, when we’re at church for Epiphany.”

“Will you engage a new tutor?”

“I’ll have to give that some consideration.” Earl Beaufort paced around the room and stared out a window. “Jane intends to take over your training this spring. To bring someone out here for a few months might not be fair.” He paused and glanced at Kate. “It would take at least a month to find someone. What do you think?”

“I…” Mrs. Crozier would want me to speak intelligently, with thought. “I’m certain you will decide what is best, Father. Miss Primrose will be an excellent society tutor – Mrs. Crozier said so.” She felt a tear roll down her cheek. “I would like to continue with my Spanish and Russian studies. Perhaps there is a language master in Taunton I could visit?”

“Yes, of course.” Earl Beaufort sat and put an arm around his daughter. After a long pause he said, “Death is always near. We must accept it and carry on. Be comforted by knowing Mrs. Crozier is with her husband and children again.”

Kate found she no longer had a voice. She kissed her father’s cheek, then slipped from his arm, walked silently to her rooms, and found Isabel unpacking, Miss Nestor helping.

“Yes. My father told me,” she confirmed, and drifted into her bedroom.

Miss Nestor followed. “How do you feel, my dear?”

“I’m not…” she slouched on the pillows in a window seat. I don’t know what to say.

Miss Nestor edged over and peered into her eyes. Kate held out an arm. The governess quickly stooped to her embrace. Kate wept a bit, pondering about Mrs. Crozier and how it felt to die. I didn’t get to know her. She was so distant and hard. But, I still cared for her, and she was such an excellent teacher. What else would she have taught me? Kate eased out of the hug, stood, then deployed a handkerchief and composed herself.

“What will happen?” Miss Nestor asked.

“My father has yet to decide. He may find a language master for me. Otherwise, I suppose we continue with your lessons.”

“Oh no, that won’t do!” Miss Nestor shook her head. “I’ll order more books, and we shall delve deeper into the subjects Mrs. Crozier instructed. I may not have her vast knowledge, but we can learn together.”

“Thank you,” she whispered. “Thank you.”

“Hush, hush. All shall be right, my dear.” Miss Nestor eased back this time and smiled. “You should get changed. There’s a dapple-grey mare that needs exercising, and a dog that needs walking.”

Upon hearing the word dog, Ebony stepped between them wagging her tail, looking up.

“Absolutely!” Kate crouched and fondled her pet. “Misty will have to wait until tomorrow, but this travelling suit is fine for a walk.” She stepped into her dressing room and took up a fur-lined cape, hat and muff.

Meandering around the front yard, the browns of winter turning orange with the declining sun, Kate gazed out at the Exmoor hills. We’re quite small, compared to the earth and sky. Do we leave much behind when we die? She stayed on the gravel, avoiding the mud, watching Ebony run around the bushes and empty flower beds. Mrs. Crozier said I could be a great woman. I’m not certain what she meant, and now I’ll never know. At the lane Kate peered through the bare trees and picked out the red and grey patchwork of Maddie’s cottage.

“Let’s visit Maddie,” Kate said to Ebony. I haven’t seen her since my flow started in August. She was right, it’s fairly regular now – with the full moons. “This way, Bonny.”

Kate marched through the woods, her breath puffing out great clouds of steam, the leaves crunching underfoot. At the gate she heard someone whistling Oranges & Lemons. Pixie, erstwhile London costermonger and now scullery maid, appeared from the side of the cottage hauling buckets. The girl halted with a jump, splashing water from the buckets, the tune cut short. Ebony dashed around with tail wagging.

“Hello!” Kate said enthusiastically. “How are you?”

“My lady…” Pixie gasped, wide-eyed. She awkwardly attempted a curtsey, the buckets thumping the ground and water splashing out again. “I’m fine. How are you?”

“Middling.” Kate made use of a word she had heard often while in the north of England, but then wondered if Pixie would know or fathom the meaning. “Travelling can be quite tiresome.” She opened the cottage door and held it wide so Pixie could enter with her load. “Where’s Maddie?” Kate glanced around the interior of the home, the plain but highly polished wood furniture glowing in the fire and candle light.

“At Kingswood Farm. There is sickness there.” Pixie’s high vacuous tones took on a hint of warning.

“Why are you here?” Kate sat in the settle by the hearth.

“If you please, my lady, Cook said I could come, with the family being away…” Pixie blushed. “That is to say, you and your father not at home, and we–”

“It’s fine, Pixie,” Kate interrupted and smiled reassuringly. “Don’t trouble yourself. Did you have a happy Christmas?” 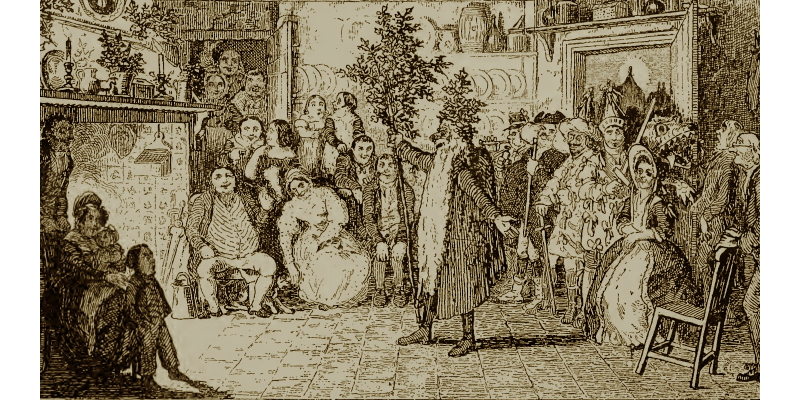 A folk tradition, mummers performing at Christmastide was always a delight and popular throughout the Victorian era.

“Yes, we had a big dinner and sang carols, then mummers plays, then — oh! Thank you, my lady.” Pixie took gaily coloured knit mittens from her apron pocket, pulled them on, then displayed them somewhat like hand puppets. “And for the shawl.”

“You’re welcome. Who gave out the presents?”

“Usually I help my father distribute the presents to the servants. Why weren’t you wearing the mittens to haul water from the well?”

“And where is the shawl? It’s cold and damp today.”

“I wore it to church. I shouldn’t like to get it dirty.”

“You should wear it whilst you’re out.” Is there an old coat of mine she could use?

Pixie stowed her mittens, added wood to the fire, poured water from the buckets into a cauldron, then made busy at a table scraping and chopping various tubers.

“Has Maddie been teaching you what to do with plants?”

“Are you here often?”

“Whenever I can be.”

“What are you labouring over?”

“These are marsh mallow roots. I’m decocting them.” Pixie pointed out one of the pots by the fire with her paring knife.

“I’ve drank Maddie’s sore throat syrup before.” Kate smiled at Pixie’s use of an apothecary term. She rose and peered in the various pots. “Decocted marsh mallow root and then add honey?”

“And, depending, some camomile, lemon, ginger, and apple cider vinegar. Camomile flowers or raisins can be boiled with the roots.”

Kate considered the girl for a moment, happy to see her at work with an air of confidence. Would Pixie be the village wise woman some day? She briefly wondered if Maddie had been summoned when Mrs. Crozier took ill, but then remembered the women died in her sleep. “I’ve only a moment ago learned of Mrs. Crozier’s passing.

A post-mortem photo of a corpse on display, possibly for a wake, late Victorian.

“Oh… yes… I helped with her washing and dressing,” Pixie said softly. “We waited until she went limp, then dressed her in a beautiful black gown with gold embroidery. We braided her hair and covered her face with a black veil. She was laid out in the small parlour, then the undertaker came a put her in a box.”

“And took her away?”

“A cart came the next day.”

“I don’t suppose you knew Mrs. Crozier.” Kate remembered the woman had cruelly referred to Pixie as an idiot and imbecile many times.

“Yes. To all the children. Not friendly… but understanding. Never angry with our work. Quick to give a helping word. She did hit Mary once for being lazy.”

“Hmm… she would never abide sloth or negligence of any kind. I’ll tell you a secret if you promise not to tell anyone.”

“She did? For sloth or negligence?”

“Perhaps…” Kate grinned briefly at Pixie’s expanding lexicon, “but more for intemperance, and imprudence. She taught me a great deal about acting as a responsible adult. Proper behaviour, and concerns I never would have thought of otherwise.”

“Yes, ’tis. I’m a better person for having known her. Although, I didn’t agree with her every sentiment.”

“No matter.” Kate performed a small dismissive shrug. “It has been pleasant talking with you. Perhaps next time we’ll share a pot of tea. I’ll let myself out. Please say hello to Maddie for me. Come on, Bonny.”

She swept from the cottage, securing the door once her black retriever dashed by, then they wandered through the forest. The recently deceased lingered within Kate’s mind. Mrs. Crozier said I have the potential to be a great woman. What is a great woman? Boadicea or Joan of Arc? I’ll never be a warrior. Sappho or Mrs. Browning? I’m certainly not a poet. I don’t believe she thought I should merely have children for a great man. I’m sure she felt I could do important work… but what? Strolling back toward the manor, Kate looked up at one of the gargoyles. Perhaps share my future husband’s interests? Charity? She focused past the statue to the windows and noticed her maid and governess watching. Kate gave them a little wave. I’ve still got a lot to learn. At least I know I can ask Isabel about men. Stepping to the door, turning to the last rays of light, she tarried a moment longer. I’m fourteen years old next week. There has been a great deal of change since my last birthday, and there is still so much yet to come. It’s like Father said about death, I must face it and carry on. Hopefully, it will only get better.