Like any fashion, make-up went through highs and lows of popularity through the centuries, indeed, from decade to decade. This article will concentrate on Britain in the 1800s, up to and including the early Victorian era. It by no means applies to other parts of the globe, and does not cover all the different tastes and divisions of style that existed. Remember, there are always exceptions in every circumstance. A point of clarification; make-up was not a term used commonly until after 1870.* Cosmetics referred to anything applied to the skin of a medicinal nature, and embellishments were pastes, powders and paints, used to alter appearance. People with acne or smallpox scars, or similar disfigurements, often wore pastes to smooth their complexions. All of these products were purchased at local apothecary (pharmacist) shops and through doctors or, for the very wealthy, ordered from specialist dealers abroad. There were also home-made versions, and even the poor where known to indulge. So, yes, people did wear make-up throughout the 19th century, subtly and garishly.

Here we have a macaroni (circa 1780) and dandy (1818) at their “toilet tables” getting ready for their day. Note the posture and waistline of the dandy indicates a corset. On the right is a drawing of George “Beau” Brummell.

During the Regency (1811-20) and Napoleonic Wars (1803-15), aristocratic and affluent men in Britain started to move away from the dainty silk outfits, wigs, and heavy face pastes and paints that had been popular at court, peaking with the macaronis in the late 1700s, and continuing with the fashionable dandies. Probably the largest influencing trend to adopt more masculine appearances was the wars, as Admirals and Generals became national heroes, so the wealthy gentlemen emulated the “rugged” look. The suits and primping were still far from a soldier on campaign, but at least they proved more practical. Having the Prince Regent abandon his wigs and adopt minimal make-up, trousers (known as pantaloons), waistcoat and topcoat, as so famously influenced by Beau Brummell (1788-1840), meant the dress at court changed to reflect these tastes. Note: Men continued using pastes as moisturisers, to help heal and hide blemishes and scars. (For further information on men wearing make-up click here.) 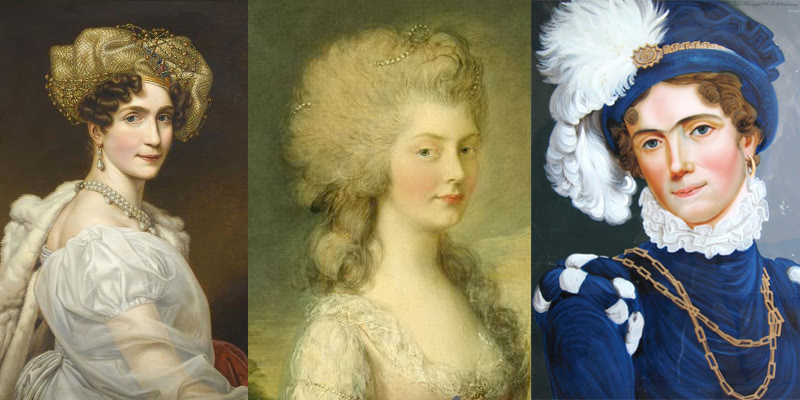 Ladies from late 1790s to 1830, revealing the popularity of very pale complexions with rosy cheeks, somewhat red lips, and perhaps a bit of eye-liner. The most ostentatious adornment in these portraits is a pearl necklace.

Ladies had already gone to limited use of make-up during or soon after the French Revolution (1789 to 1799), rouge being the exception. Clergymen preached against “painted ladies” pointing to Jezabel and godless heathens around the world as examples of ill repute. The Church of England, along with Britain’s empire building, was determined to bring purity and modesty to women of all lands. Queen Victoria denounced painted faces as vulgar, but it was later in the era with her prolonged mourning period, and not until the 1870s with an economic depression that minimalism became the strictest, only to swing back again in the 1880s with the “professional beauties” and completely abandoned in the “Naughty Ninties.” (For more on these societal changes and the Victorian feminine ideal, click here.) In the 1840s, only prostitutes and actresses, who many considered of the same ilk, embellished their appearance with excessive paint and gaudy jewellery; however, limited use was the rule for most ladies. By about 1850, as only the most effeminate of dandies were still applying make-up, women were adopting subtle applications, and wearing more precious adornments. It was during this decade Crème Céleste became popular, which was a mixture of white wax, spermaceti (from an organ inside sperm whale’s head), sweet almond oil, and rosewater. This facial paste had moisturising properties, but it also hid blemishes and provided a light smooth complexion. It developed into a common emollient and cosmetic remover, soon known as cold cream. 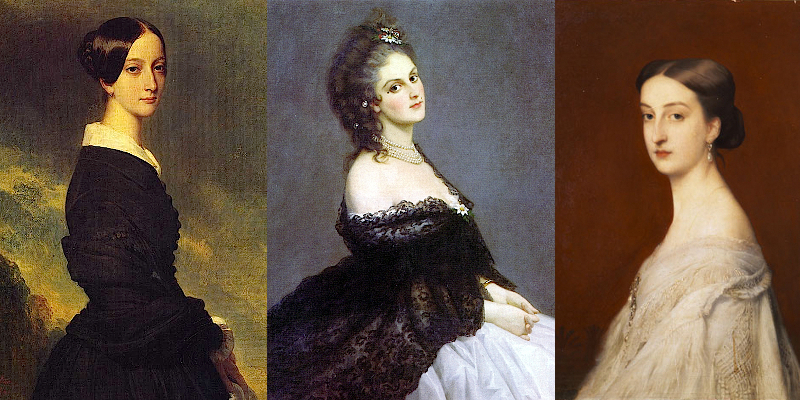 As part of their “toilet” in the morning, ladies of leisure would ensure well plucked eyebrows, perhaps trim their eyelashes, and daub castor oil onto their eyelids and lashes. To hide freckles, blotches, or redness, they could dust on rice powder, zinc oxide or, the most expensive option, pearl powder, which was a mixture of chloride of bismuth and French chalk (talc) and provided a silky white and lustrous cosmetic powder. On their lips they might apply a clear pomade (like beeswax) for a shine and to provide protection from the elements, and some contained dye to discreetly accentuate the lip colour, crushed flowers and carmine (made from the female cochineal insect) being favoured. Many recipes for lip salve included evergreen bugloss, also known as alkanet, a common weed with blue flowers that provides red dye, the root in particular (but does nothing for chapped lips). To review some 19th century cosmetic recipes click here. For a healthy complexion, and to contrast the very pale skin of the privileged class, red beet juice or a carmine dye could be massaged into the cheeks. For bright eyes, a drop of lemon or orange juice in each eye would be used, and was considered a cleansing method. Poisonous belladonna was also dropped into the eyes causing the pupils to dilate, creating a luminous glow, but clouding vision. People with cataracts were prescribed belladonna; Queen Victoria used it in her declining years rather than have surgery. Eye paint (eyeshadow) was popular, red and black, used excessively by “fallen women” but very subtly by respectable ladies (more like eyeliner), who would deny wearing it and be insulted if anyone ever dared to ask. Eye paint was made of mixed lead tetroxide, mercuric sulphide, antimony, cinnabar, vermilion, and secret ingredients. Another choice was to put beeswax on their lashes, then apply any number of black powders, from soot to crushed precious stones. (Kate Tattersall favoured lightly coloured lip balm, subtle eye paint, and on occasion a dusting of pearl powder.) 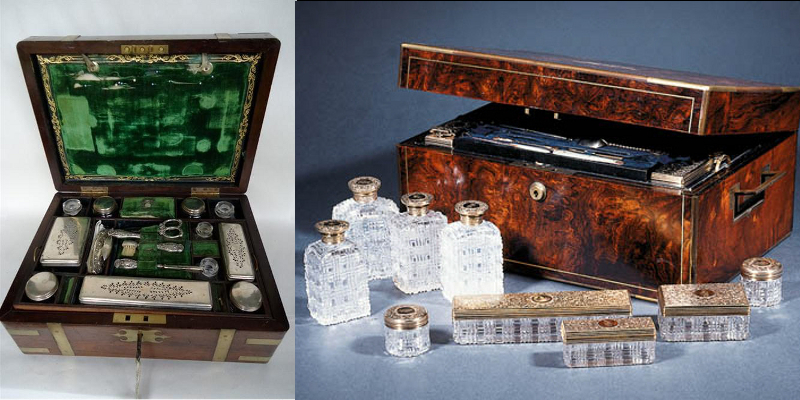 Two lovely “toilet table” chests from the 1850s, of rare wood and bound with brass, lined with lush velvet, both would likely have mirrors in the lids and amongst the various containers include scissors, tweezers, medicine spoons, corkscrews, bodkins, boot hooks, knives, &c.

How did ladies of the nobility and gentry hide their use of pastes, paints, and powders? By including the products in their toilet chests, designed for use on their dressing tables and for travel. Within these expensive little boxes were medicinal cosmetics, and all the application tools, but then the vilified embellishments as well. Some chests were crafted with secret compartments. An imported box of make-up could easily be emptied and discarded, the products re-bottled and placed amongst acceptable skin creams and treatments, many provided by doctors and therefore totally respectable. In particular, prescriptions were an ideal excuse for older ladies to coat their faces with a paste, achieving a light-coloured even coverage, and the charming bloom of youth. Middle-class women often couldn’t afford their own toilet chest, but they could purchase a medicine chest for a reasonable price, and hide appearance enhancers in with the tonics and balms. The products were all readily available at any apothecary shop, and a discreet lady could send a servant to the next town for purchases that might prove embarrassing. 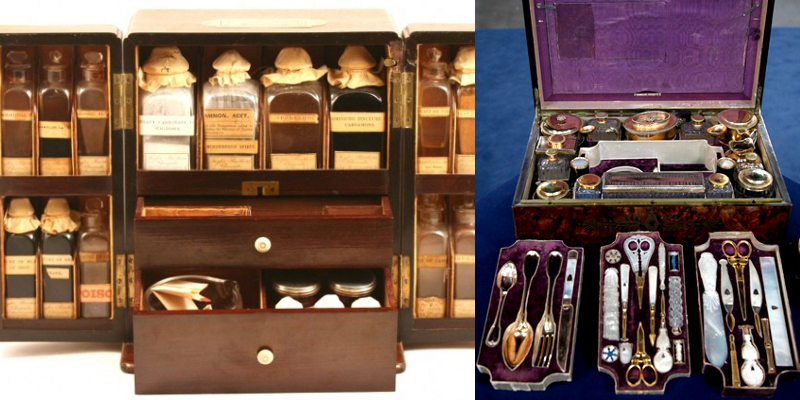 Two ends of the spectrum. A plain apothecary’s chest from London, Taylor Bros of Cavendish Square, 1860, but with a secret compartment, and an elegant travel case including a hidden document wallet, gold plated cutlery, mother-of-pearl handles, sewing kit, pens and inkwell, numerous spare cut-glass containers, &c. Both would have served well to hide a lady’s make-up.

If you would like to peruse hundreds of portraits of wealthy ladies from 1480 up to 1914 please visit the Grand Ladies website.

“Lizzie, since the reader first knew her, had begun to use a little colouring in the arrangement of her face… there was the faintest possible tinge of pink colour shinning through the translucent pearl powder. Anyone who knew Lizzie would be sure that when she did paint she would paint well.” The Eustace Diamonds by Anthony Trollope, first published in 1871 as a serial in the Fortnightly Review.

“Half the girls do it, either paint or powder, darken their lashes with burnt hair-pins, and take cologne on lumps of sugar or belladona to make their eyes bright. Clara tried arsenic for her complexion, but her mother stopped it,” said Fanny. An Old Fashioned Girl by Louisa M. Alcott, first serialised in the Merry’s Museum magazine in 1869.

Trivia: By the late 1800s women were using blue pencils to trace their veins. Powders were available with blue and lavender tints. This allowed women to appear very pale even in the yellow aura of gas and candle light.

*The earliest quote I could find where the term “make-up” is used to denote an application to the face, appears in “The Pearl of the Antilles, or, An Artist in Cuba” by Walter Goodman, 1873. In it he uses make-up to describe the various ways he alters his appearance for the stage. Other quotes I’ve found from that decade are likewise always in reference to the theatre.

A Missing Purse0 Comment(s)
Ghost in the Gloaming1 Comment(s)
Reconnoiter & Request4 Comment(s)
" This is actually really helpful. "~ F.Y.S
" Cool "~ Lillie Pepper
" What a different Website. I design Walking Canes and I have... "~ Antony Andrews
Loading Comments...