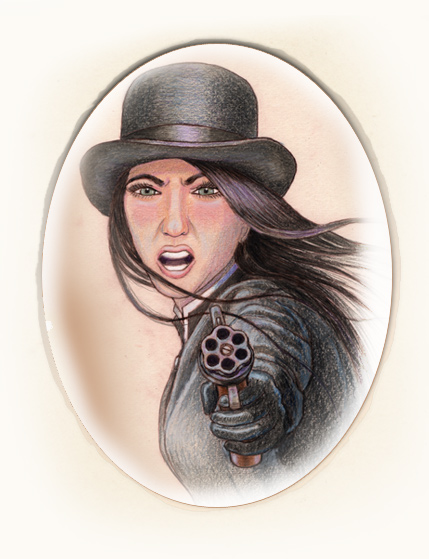 Great Britain, the mid 1800s, an era of conflict, political reform, and social upheaval. The Royal Navy ruled the waves and the English people expected safe passage around the world, spreading their ideals of civilization, protected by brutal “gunboat” foreign policy. Industrialization brought an ever growing middle-class, but there continued to be the fabulously wealthy and a vast majority of wretchedly poor urban dwellers. Throughout the Empire existed rampant poverty, child labour, vice, and yet crushing moral standards. Even for the affluent, childhood ended at about the age of twelve, with girls and boys expected to act like adults. Brides and soldiers were often in their early teens, accepting the most serious of responsibilities such as parenthood, and life or death decisions.

Kate was fifteen years of age when, through circumstances and a desire for adventure, she became an operative with the British Secret Service. She carried out clandestine taskings from 1849 to 1855, leading up to and including the Crimean War. Below you can learn a little about those missions and how she used her intellect, charm, and aplomb, and her brother’s fantastic inventions, to work her way through each desperate situation. If you would like to read about Kate and the mid 1800s, please visit the Article Section where you will find historical facts highlighted by photos and illustrations.

The series is written in a third-person limited style, with the knowledge and observations of the focal character, as it would be by drawing and expanding upon information taken from diaries. You will only be aware of what Kate knows, learn from her experiences, and view the adventures through her eyes; her comprehension changing as she ages.

This page will eventually preview all of Kate’s perilous missions. Due to violence and mature themes they are recommended for readers thirteen years of age and older. 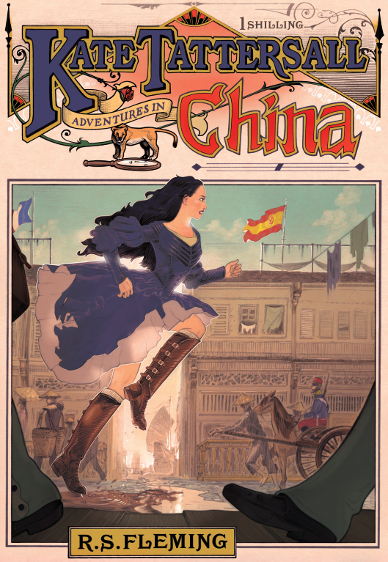 In which the elegant young Lady remembers how much she longed for excitement as a tomboy, and takes on the mantle of daring Adventuress.

Having just stepped out into society at the age of fifteen, Kate is thrilled to be going on a grand tour to the Far East, and perhaps a prospective suitor awaits her in Canton. Her brother gives her instructions to capture images of the construction being carried out by other nations in the Chinese ports, which she sees as a bit of a lark. However, on the voyage are the dangers of the open ocean, and she experiences the terror of combat against desperate men when pirates attack. Then, the journey grows even more perilous, when she must deal with a man she knew from childhood, who has become an opium smuggler and slave trader. Kate had never truly considered what it meant to have an adventure, but she accepts the risks and adapts quickly to carry out tasks for the British Secret Service.

Receive an inscribed copy of Kate Tattersall Adventues in China with every donation of $10 or more plus shipping. Please use the Contact Page to provide your shipping address and we will reply with your total. 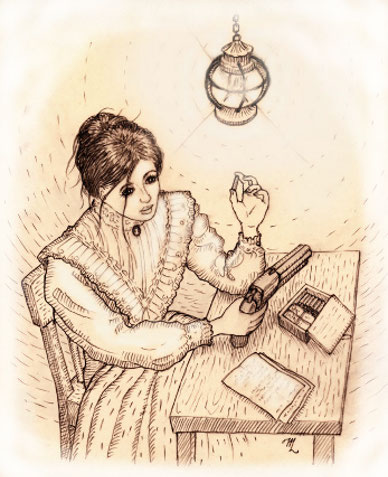 In which the Adventuress, flushed with her early success, takes on a much more perilous mission that would have been far beyond most ladies, or men, of her day.

Stopping in Bombay on her return home from China, an encrypted letter sends Kate into the heart of the north-west frontier of India. The situation is extremely volatile with native revolt brewing all around her. Not knowing the languages, or looking anything like the Indian people, she has to use cunning and luck to carry out this clandestine tasking in a land where women are culturally disadvantaged. Finding confidence in her appearance, and realizing to a degree how attractive she is to men, gives her the ability to take on a daring disguise. When the magnitude of the situation and dangers involved become apparent, Kate finds courage from deep within, acting decisively with great aplomb, utilizing her equestrian skills and the remarkable handguns provided by her brilliant brother to carry the day. 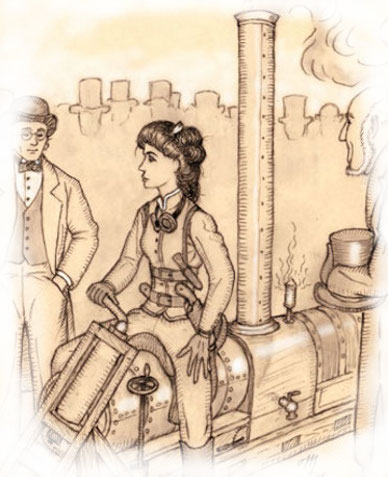 In which the Adventuress adopts a new disguise, experiences failure, and out of necessity acts most unladylike.

Home in England and feeling quite proud of her deeds for the Secret Service in China and India, and newly wed to the love of her life, Kate is asked by Lord Palmerston to take a position at Dublin Castle to root out treason. She travels to Ireland and witnesses first hand the horror of the great potato famine, works to prevent assassinations, learns to never be caught unarmed, and metes out her own type of justice. The sheltered life of a Victorian Lady has now been left far behind, and Kate begins to see how much she has to learn. It is in this adventure her brother’s genius truly starts to reveal itself, not only in his remarkable weapons, but through his fantastic steam powered creations. Kate had been the tester for Jack’s inventions all her life, now her mastery of them makes her an operative to be reckoned with. 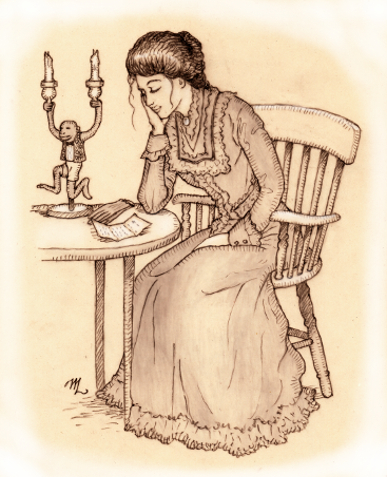 In which the young Lady is called upon to act as a member of Bavarian royalty, but decides to perform as an Adventuress when the situation gets desperate.

Heartbroken by a tragic loss, Kate accepts a clandestine tasking to keep busy and get away from England for awhile. What is supposed to be a fairly simple mission teaches her of intrigue and treaties between European governments. She is asked to play a part in another country’s politics which affects Europe as a whole. Her previous experiences had revealed dark aspects of the Empire that left her wondering about the righteousness of British foreign policy, so she takes time to research current events, international affairs, and history. Kate’s education, which was somewhat uncultivated except in the study of languages, classical history, and natural science, she makes a conscious effort to improve with the desire to be a better Secret Service operative. When the time comes to choose between orders and her own ethics there is very little hesitation, taking great risk with battle looming. 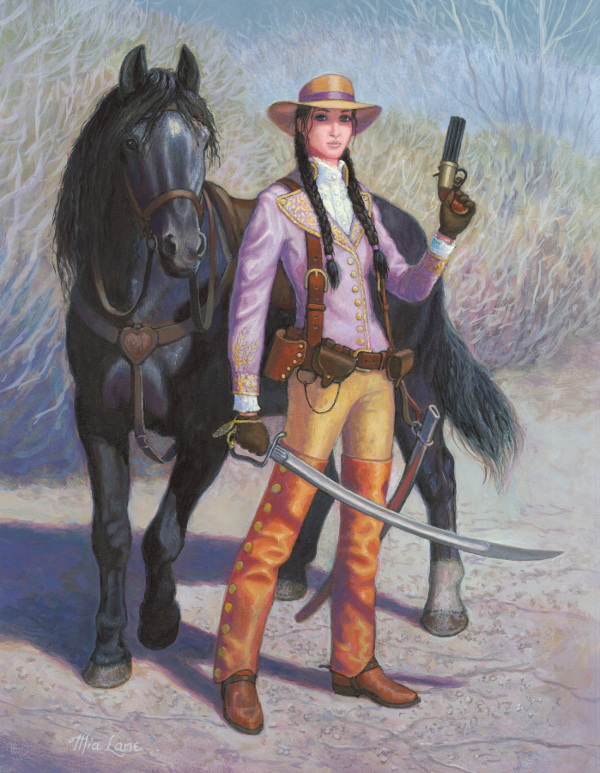 Kate Tattersall as she may have looked while travelling through the frontiers of Morocco, Turkey, or Russia, by M. Lane. She wields a six-shot .35 calibre revolver, one of a pair, and a custom model 1811 Blucher light cavalry sabre with silvered guard and scabbard. She wears a practical sun hat and silk shirt. Kate’s fine wool lavender jacket is decorated with gold buttons, galloon trim, and embroidery. Her breeches would be crafted of the finest chamois, with tailored drawers underneath, and her spatterdashes of a heavier leather. Of course, Kate would have had a matching lavender skirt to don over her breeches when approaching a town. You may read more about weapons and clothing in the Articles section.

Readers have asked about the years when Kate grew from a tomboy to a young lady, and in particular some of the details alluded to in her little bio. As was typical for the mid 1800s, girls and boys were often expected to act adult at an early age. Kate had a great deal to learn, experienced dramatic change, traumatic events, her first romance, and exciting adventures at home, London, and Paris.

Below you will find links to chapters covering interesting events in Kate’s life, from her thirteenth birthday to her débutante presentation at court to Queen Victoria and Prince Albert.