Kate paced the corridor in the medieval portion of their home, into the front hall, hesitating a moment, then climbed the stairs and entered her dressing room. All was quiet. She peered out a window, hoping for the approach of a carriage. Nothing, the lane empty but for wind-tossed leaves. This is killing me. I could be out for a ride. Kate removed her red Scottish bonnet and threw it on a chest of drawers. She perched upon the stool at her toiletry table and stared into the mirror, examining the carefully applied hints of cosmetics around her eyes, the neatly arranged braids and tresses of her long shiny black hair, and the buttons and trim of her ivory coloured velvet walking suit. It’s beautiful, but does it make me look too young? It’s certainly better than the dress Jane wanted me to wear… Jane desired a grand appearance for her step-daughter, which included a slow decent of the main stairs, arrayed in an elaborate house gown, forcing Hugh Grosvenor to look up at Kate.

“Lord Grosvenor will be dazzled by your beauty,” Jane had said. “And you will appear like an angel coming from heaven!”

“Ridiculous,” Kate had snarled, growing hot, embarrassed merely at the thought of such a scene.

“Don’t you want to make an impression?” Jane then demanded.

“I don’t need to! Hugh has made an offer. I’ll not wait around for hours in that dress! Father? Please say something!”

Compromise found Kate still making an artful entrance, but not as grand; however, she felt the entire drama far too contrived. Once the initial greeting of Hugh was done, she prayed his visit would be friendly and natural. Will he kiss me? Not a peck on the cheek like he gave me after our walk beside the Serpentine – a real kiss. With passion? When I– Kate jumped to her feet, muscles tight, hearing a thump and muffled voices. She scurried to a window and saw below a small enclosed carriage, glossy black and red, with four dark brown horses, attendants unloading a couple chests. He’s here! He’s here! Heart beating fast, Kate strode silently to the servants’ stairs, tiptoed down, then out a back door, washed by cool fresh air. Her black retriever rose from a sun-drenched patch of grass. Seeing the dog calmed Kate.

With wagging tail, Bonny accompanied her mistress around the outside of the manor. Kate’s instructions were to wait a few minutes before appearing. She peeked through some shrubbery to survey the front driveway; Hugh was not in sight. How much longer should I tarry? I don’t– Bonny trotted ahead. Eek! Bonny! When I hide you’re supposed to hide too! Will you ever learn? The dog having made the decision for her, Kate ambled onto the gravel and slowly approached the carriage. A short young postilion in livery, heavy riding boots, top hat, and canvas cloak, held the front pair of horses steady and bowed to Kate as she passed. What handsome animals – they match each other perfectly. Hmm… no coat of arms or crest on the carriage door? Very fine paintwork. 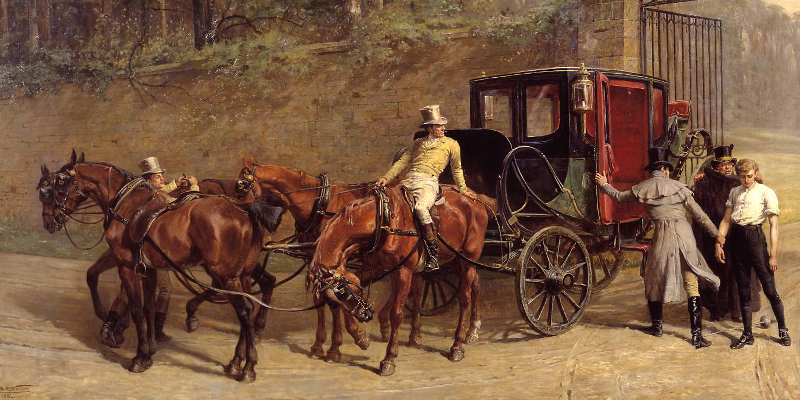 Detail of Success! by S.E. Waller, 1881, depicts nicely a post-chaise and four with postilion riders. In this painting, a wealthy young (and regretful) man has just won a duel and is being hurried away by his second and servants.

Bonny bounded to the servants as they carried chests through the main front entrance. Kate followed, and paused on the step within, by the threshold, to take stock, conscious of allowing a clear passage. The elderly Mr. Smythe, their butler, directed the footmen. Hugh Grosvenor stood near the fireplace, framed by Kate’s parents. Kate took a breath and stared at Hugh. He hasn’t changed. Still trying to grow a beard. That’s the man I’m going to wed… where’s the tingling? It will come… She imagined embracing his wiry body, kissing his kind face, letting him–

“Lady Kate.” Hugh bowed, then stood rather stiffly at attention, clutching top hat and gloves, a blush rising with a smile.

Kate returned the smile, and stepped closer. “How were the roads?”

“Is the post-chaise and four yours, or hired?” Kate asked, filling the pause.

“The carriage is splendid. The horses are beautiful.”

“I have a…” Hugh glanced around the hall. “Thank you. They are mine. That is, I had them sent ahead… to have them here.” Beads of perspiration appeared on his forehead.

“Where did you last change horses?” Earl Beaufort asked.

“Ah, no, sir, no changes. I travelled by railway to Bridgwater.”

“Hmm, quite.” Earl Beaufort nodded. “I sometimes forget the railways.”

“Lady Kate, perhaps you could take Lord Grosvenor for a stroll in the front garden whilst the servants tend to his baggage,” Jane said.

“Certainly.” Kate was a bit surprised by the suggestion, but recognised Jane’s masterful solution to what seemed to be an increasingly awkward conversation. “Excuse us, Father?”

The couple walked outside and around the carriage, preceded by Bonny. Kate took up her usual marching pace, then checked herself. Be graceful. Slowly, softly… The cool breeze whipped wavy hair around her face. I don’t have a bonnet! She glanced sidelong at Hugh. He still carried his top hat and gloves. All right. We won’t stay out for long. I’ll–

“I have something for you,” Hugh said. “May we sit a moment?”

“There’s a bench just there.” Kate pointed. What has he brought me?

Kate perched, quickly sorting some tangled ribbons on her bodice. She tried to take a spot where the wind would blow her hair back, succeeding somewhat. Hugh settled, putting his hat and gloves aside.

“I think I have something for you,” Hugh amended, looking into the distance. “Do you… have you decided…”

“I accept your offer, Hugh.”

His bright eyes locked on Kate’s. He laughed, and reached out to hug her shoulders. Kate placed her hands on his lapels, laughed too, then leaned forward. As they neared, Kate closed her eyes, and felt a kiss upon her brow. She jerked back and opened her eyes. I want a genuine kiss! Kate grabbed Hugh’s lapels and determinedly kissed his lips. He hesitated a heartbeat, then hugged forcefully and joined in with passion. Kate felt hot, and a shiver went from her scalp to her loins.

“Whew! Kate, please.” Hugh eased her away. “I cannot… you mustn’t do that to me.” He flushed bright red. “Men aren’t capable of controlling all their desires.”

Kate saw how Hugh was affected by his posture. I wonder what he looks like under those fine clothes? He’s probably wondering the same of me. She guffawed, then nodded. He’s thin – that’s good. I dislike fat men. I wonder if his shoulders will broaden? “My bosom will grow larger,” What?! Did I say that aloud?! Kate felt her face burn.

“Pardon?” Hugh choked, swallowed, and blinked. “Yes… yes, with age and children. It’s not a concern. I’m no–”

“I’m concerned,” Kate gasped and stood. I desire a figure of consequence. “I shan’t like to disappoint you.”

“You don’t!” Hugh stood with a quick adjustment of his trousers. “How could you? You’re a Grecian beauty! By the time we wed, more so.”

Kate met his eyes and speculated on who possessed a deeper blush. I’ve done it. I’m committed. Jane and my father will be pleased. Is this–

“I have a gift for you.” Hugh pulled a small silver box out of a waistcoat pocket, from which he produced a gold ring, and presented it to Kate. “This has been in my family for centuries. I want you to have it. This ring is my promise to keep our contract, until we are engaged next spring.”

“It, is, lovely.” Kate took the ring carefully, apprehensively, and stared at the jewels. A large emerald surrounded by small diamonds twinkled in the sunlight. “This is our betrothal ring?”

“No no! I will have that made. This is a token of my affection. Something for you to hold when we are apart.”

Kate slipped off a glove, rapidly tucked some unruly strands of hair behind an ear, and tried the ring on a few fingers. This is… I feel so adult. Her vision blurred and she blinked hard. Take a breath. Control yourself. She glanced at Hugh.

“Are you quite all right?” he asked, concern-wrinkles around his eyes.

Kate smiled, quickly cuffed a tear, then hugged Hugh hard around his shoulders. He wrapped her waist and squeezed. She arched back to place her hands on his lapels again, closed her eyes, and happily accepted a slow soft kiss. As they eased apart, Hugh kept his hands girding Kate’s slender waist for a few breaths, then he let her go and retreated a step.

“We mustn’t be seen in such an embrace,” he murmured, looking towards the house, taking up his hat and gloves from the bench. “Servants are the source of much untoward gossip.”

“Oh! Indeed!” Kate nodded, keenly aware of the importance of her reputation, thoughts racing. Once we’re engaged, everyone can see us kiss. He tastes a bit of stale milk. Wait, he’s allowed to kiss me, as part of courting, whether we’re engaged or not. Oh, but I’m not out – I’m not to be courting yet. His jacket could be cut a little longer. She studied the ring again. It’s large. This may have been crafted for a man. “I’ll wear this on a chain around my neck, so it rests near my heart.” 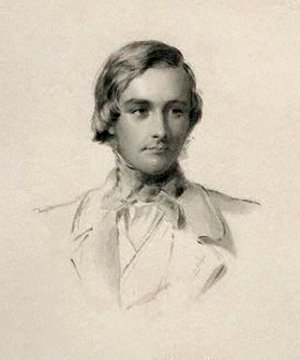 Hugh Lupus Grosvenor. Earl Grosvenor, as he looked as a young man.

“That would please me, very much,” Hugh said softly. “Next spring, in London, if you would like a jeweller to size it for you, I will make arrangements.”

“Let’s get back to your parents. They’ll be wondering about us.”

Upon entering the front hall, Smythe immediately addressed Earl Grosvenor. “My lord, please follow me. Your rooms await your approval.”

“Are they the same rooms I used in June?” Hugh asked.

“That won’t do, my lord.” The butler jutted his chin and frowned. “They require your inspection.”

“Yes, very good.” Hugh looked around at everyone. “Smythe, you have my complete attention. Please excuse me, Lord Beaufort, Lady Jane, Lady Kate.”

Smythe tottered up the stairs, closely followed by Hugh.

“Still no man-servant, my lord?” Smythe mumbled as they went.

“One of my carriage attendants serves as a valet if I require assistance,” Hugh replied cheerfully.

“Humpf! I will see to your pressing and polishing, then.”

“Thank you, Smythe, but it shouldn’t be…” Hugh’s voice faded away.

Jane rounded on Kate and grabbed her arm. “Where is your bonnet?” she hissed.

“When you first came in,” Jane continued, “you should have stood in the doorway, bathed in sunshine. You would have looked angelic.”

“Arrg!” Kate tossed her head and glared at Jane. “Please! No more talk of angels! Ladies and gentlemen never stand in doorways. I would have been in the way. My decorum matron would have beat me for such a lapse.”

“Pooh! The servants will wait if you are in the way. They’d do it gladly. It’s th–”

“Enough,” Earl Beaufort said in a low growl. He stepped between Kate and Jane. “How did you find Hugh?” he asked Kate. “Was anything resolved?”

Kate stood perfectly still for a moment, annoyance abating, examining the expectant faces of her father and step-mother. She smiled, then held up an open palm, revealing the ring.

“Hurrah!” Jane cheered, then jumped and looked frightened that she might have been heard upstairs. “This is wonderful,” she whispered.

Lord Beaufort edged close to Kate. “Is it as we previously discussed? The engagement begins when you are presented at court? It’s to be kelt quiet until then?”

Earl Beaufort placed his hands on Kate’s upper-arms. “You’re certain this is what you want?”

Kate could only nod, blinking back tears. This is what I want. I’ll be Marchioness of Westminster one day? God’s wounds! She fell into her father’s warm embrace.