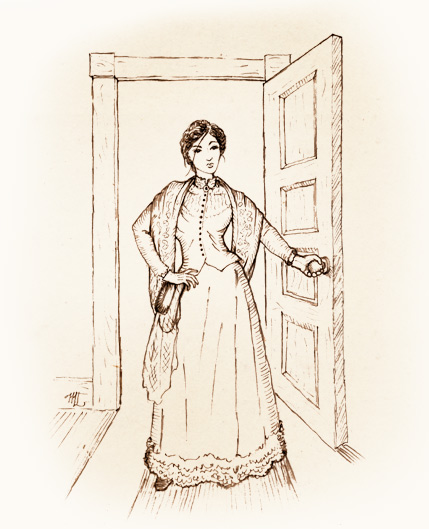 Not being any kind of a writer, and having never had much interest in Victorian history, reading Kate’s diaries and setting them down for print has proven quite a challenge. When I first went through them I noticed she’d added notes, and sorted letters to match the entries to some degree. The Victorians were prolific writers, but didn’t always date everything, or sort it the way our orderly filing cabinet computer controlled society does today. Many words and references she used left me perplexed and I had to delve into countless details which, I suppose, would have been common knowledge for a history professor.

As I read and organized the diaries into a chronological order, I was able to insert the letters and notes completely. I felt they were recorded in such a way there must have been some thoughts in writing them as narratives. It made me wonder if she was preparing to pen her memoirs. Perhaps Kate just wanted to keep a detailed account so she could pass it all on to her daughter? I started looking up some of the historical events which were referred to and found information which added to the tales and confirmed the adventures described. The people, places, political atmosphere, and current events matched every time. I recall visiting my grandparents as a child, and the tales of adventure that would be told in the evenings at bedtime. I now realize those stories were inspired by a family member, and I am admittedly in awe of her. Where small variations existed it could easily be explained as the machinations of the British Secret Service controlling the news for “the good of the Empire.” Unfortunately, there are no official records that will confirm any of it, unless they are buried in the masses of yellowed files at Horse Guards labelled Top Secret.

An aspect that particularly interested me were the notebooks. To put them in any sort of order was not possible and I can only surmise they were kept concurrently. These battered records (which unfortunately are in pieces) reveal weapons and steam power used far beyond anything in the historical records. It does seem technological advancements are often driven by military requirements, and kept secret for clandestine purposes. Therefore, it wasn’t surprising to read of fantastic inventions being utilized by operatives of the Secret Service throughout the Victorian age. The devices, weapons and machines described, although commonplace a decade or two later, would have been technological wonders and given an advantage to a spy who could master them. Something I found extremely surprising when doing research, a great deal of the technology was available to all. Indeed, inventors couldn’t find buyers for their products.

From what I’ve read it would appear the early members of the British Secret Service were of the aristocracy, independently wealthy, and acted out of conscience and desire to better the Empire. Certainly, they all must have had adventurous spirits, and many also held military ranks. The surveying officers of the the Napoleonic Wars seemed to evolve into the covert operatives of the Victorian era. It’s well known Lord Palmerston was a master manipulator, and controlled British and international politics to some degree from the early 1800s until his death in ’65. The wealth that poured into England from all over the world was largely due to his somewhat brutal foreign policies. He must have seen the value of spies, who would risk everything to carry out his schemes, while he marshaled them from Whitehall. I hope someday the records of this dawning of military intelligence surfaces so there will be official recognition.