Mrs. Dr. Henry Tattersall looked over the controls of the contraption one more time, and pushed her long black braids out of the way. The machine, copper reservoir and boiler gleaming in the sunlight, hissed and smoked as it reached full steam.

“You’ll be careful, won’t you, Kate?” her husband asked, the concern accenting his voice.

“Yes, Henry,” she assured him with a smile. “I’ve been testing my brother’s inventions for as long as I can remember. It hasn’t done me any great harm yet.”

“That’s not true. You were seriously injured when that pistol shattered.”

“Well… yes.” She glanced down at the scar on her thumb and palm. “That was before Jack perfected his methods. He’s more careful now.”

“Precisely, careful. And that’s what I want you to be.”

“And I will.” She grabbed the lapels of his tan coat and gave him a kiss.

Newly-weds, there was a great deal of passion between them. Henry wrapped his arms around Kate and held tight, bending her back with the force of his embrace.

Henry glanced around. They stood in a secluded country lane north of Hastings, just the two of them, except their horses and Jack, who was concentrating on the steam-engine. Henry smiled, a gleam in his eye, then let a hand run down Kate’s thick brown wool twill jacket, onto the buttocks of her matching snug riding breeches, and gave a playful squeeze.

Now that’s enough!” Kate declared, pushing him off, but laughing as she spun away.

She was wearing this outfit, custom made for riding astride, in the hopes that the heavy tightly woven material would afford some level of protection if she crashed into a thorny patch or hedgerow. She’d covered her field boots and lower thighs with long leather spatterdashes, which had large brass buttons, imagining them serving as a bit of armour. As she stepped around to the other side of the machine, Kate continued to smile, and tingled inside. It was the same thrilling sensation she experienced whenever Henry caressed her body. Before their wedding night, she thought her urges might be hysteria, but happily knew otherwise now.

“Are we ready, Jack?” she asked, while lowering her padded protective goggles into place, adjusting the strap to ensure a secure fit.

“I think so,” he muttered, fiddling with a valve.

The hissing smoky contraption was her brother’s latest attempt at a steam-engine propelled velocipede, and the first to get to a point where it required a genuine road test. Kate had worked with her brother on the design, recently assaying two models in as many months, and made several suggestions to improve the comfort and handling of the device. However, still a work in progress, certainly there would be more variations yet to be built. When it came to creating mechanical wonders Jack was a brilliant and tireless inventor, but looked to his little sister to carry out the practical testing.

“We should get started.” Kate checked the buttons on all her clothing once more, pulled on brown leather gauntlets, then eased a leg across the two-wheeled mechanical “horse” and stood over the seat, which was an old hunting saddle. Jack aided her in folding up the stands.

“Wait, you need your hat,” Henry said, coming from the wagon.

It was one of the newly fashionable gamekeepers’ hats from the firm of Bowler & Bowler. Kate had purchased a size that fit tightly over her hair and ears, the very stiff felt dome and brim serving as protection.

“Yes,” Kate agreed. “I don’t even want to think about running into a stone wall, or the boiler exploding.”

“Something like that is more dire than I care to contemplate, but I’ll be following close behind to see you’re safe.”

Kate leaned sidewise and presented him a cheek so he could give her a kiss. Then she noticed Jack glaring at them through his spectacles.

“Nothing is going to explode,” he insisted. “You’re trying my friendship, Tattersall. Getting in the way… distracting Kate…”

“All’s right, Beaufort.” Henry took on a casual air. “You have to learn to share your sister with others, don’t ye know?”

“Do you blame me for being concerned?” Henry changed his tone to serious. “Look at the size of this monster. How’s she supposed to keep it upright?”

“It’s perfectly balanced with a low centre of gravity. I take everything into consideration. And Kate’s all sinew. I’ll wager she’s stronger than you!”

“That’s not fair, Jack,” Kate interceded. “Henry’s recovered from his illness quite well. He’s getting better everyday. And besides, I’m probably stronger than you, too.”

“I’ll leave you to it, then.” Henry winked at Kate and strode over to his horse.

“Now, be certain to follow the exact route we scouted yesterday,” Jack said, adjusting his spectacles. “We cantered those lanes in fifteen minutes, and they make up about a league. It’s as precise as I can manage out in the countryside. I hope you achieve a similar time today.”

“And there’ll be enough steam?”

“More than enough. While you were away I made vast improvement to my engines. I’ve used many lightweight efficient components I received from a colleague in Chard. I’m planning a model that will produce much greater speeds and have a long range.”

The chimney belched smoke out behind her as Kate placed a hand on the tiller that controlled the front wheel. Excess pressure blew off while she checked the flywheel and saw it spinning smoothly. Reaching down by her foot she released the brake, engaged the drive, and began to creep forward. Slipping her toes into the stirrups, which dangled from the bottom of the oak frame, she opened the velocity valve several turns and looked ahead as the speed increased. Glancing over her shoulder, she noticed her brother check his watch, then poke it back into his waistcoat pocket, Henry on his horse ready to follow.

Without having gained much speed, Kate took the first corner wide and slow; during turns the mass of the construction was daunting. A handle on the top centre of the reservoir provided a spot to place her free hand and improve balance. With a bit of a wobble she steered into a rut. This stretch was straight and climbing so Kate let the steam push the device, until suddenly it felt as though she’d lose control. The wheels, small but heavy ten spoke dray hoops with a rubber coat, transferred the impact of every bump into her spine and shoulders. Ow! I’m going to feel that later. She put greater weight in the stirrups and focused on the second corner, slowing the contraption much more than she would a horse. Having surmounted that bend successfully she opened up the steam again and managed to wave at some gawking farmers. Ahead there lay a wet stretch the horses had churned through easily enough, but now the abrupt slow down caused by the wheels sinking in the mud almost threw Kate out of the saddle and into the tiller. Oh dear, it’s like the handle is built to impale me! There was also a fear of the drive belt getting fouled and slipping. She glanced back several times to determine if a halt was necessary. The engine made a pinging sound as it laboured against the clinging sludge, then spouted a spume of soot when the wheels hit firm ground again.

Increasing in speed, bits of mud were thrown up spattering the vehicle and its pilot. Kate felt glad for the goggles but now found she had to look through speckled lenses. I don’t remember the last time I ate mud. Another corner approached and she slowed to navigate the turn with an added fear of slick wheels. The rear end of the machine started to skid sideways, but then just came back under control for the steam to be completely opened up.

Fast as it could go, heading downhill on a dry straight stretch of packed dirt, Kate clung to the tiller and thrilled at the speed she was reaching. Now we’re up at a gallop! Ahead she spied Jack holding his timepiece, wide-eyed, his mouth hanging open. She disengaged the drive and turned the velocity valve closed as fast as she could, then reached back to the low lever by her left foot and gently applied the brake, coming to a halt about twenty paces past her brother. Looking back, she saw Henry cantering down the slope with a broad smile and reining in by the other horses.

“Twelve minutes,” Jack exclaimed as he sprang up to her, having to shout as an over abundance of steam whistled angrily. “You did it in twelve minutes!”

“That’s fine, Jack.” Kate pulled the dirty goggles down around her neck and lifted herself off the saddle. “I thought it went quite fast.” Ow, I need to give my rump a good rub. Ow, ow, ow…

“This is a remarkably good test run.” The inventor seemed on the brink of bursting with enthusiasm as he steadied his creation and looked it over. “I think it’s ready for consideration by the Secret Service!” 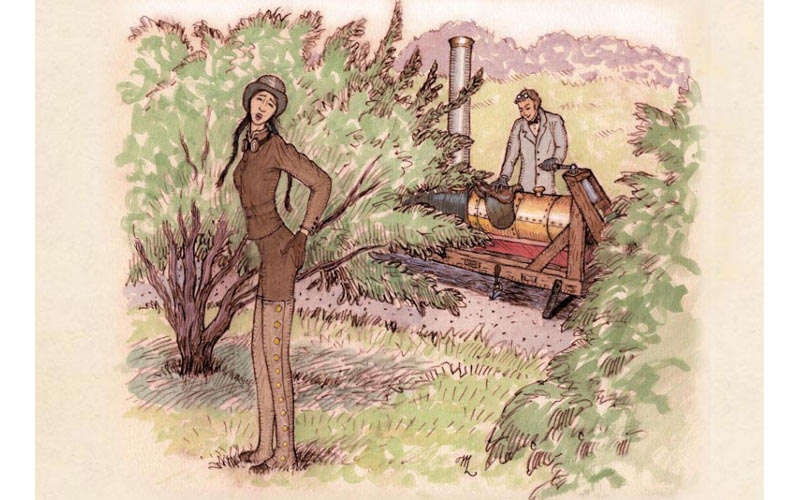 “Really?” Kate called, hidden behind a hedgerow where she gently massaged her bruises.

“Yes, if we put you on a decent road think what you could do!”

I have no idea. What could I do? “I wouldn’t be able to drive it on cobblestones. My spine would rattle apart.”

“Oh, was it bumpy?” Jack asked, sounding a little dispirited.

There was a pause, then, “Kate? Where are you?”

She could see them through the bushes. Feeling silly for hiding, Kate emerged and walked stiffly about trying to hide the pain. Ow, ow, ow, ow, ow… “Yes, it was bumpy,” she understated. Ow, ow. “The only time I got up to speed was the last stretch.” Ow… “Put more rubber on the wheels,” ow, ow, ow… “and two handles for steering.” Ow, ow, ow…

If you would like to see Kate’s adventure in Ireland available in bookshops and e format, be sure to purchase Kate Tattersall Adventures in China.

A Missing Purse0 Comment(s)
Ghost in the Gloaming1 Comment(s)
Reconnoiter & Request4 Comment(s)
" Cool "~ Lillie Pepper
" What a different Website. I design Walking Canes and I have... "~ Antony Andrews
" Hi Fred, interesting research. Not aware of these patterns b... "~ R.S. Fleming
Loading Comments...