After breakfast, Kat plodded painstakingly through a written and oral exam on the roughly two thousand families who made up the peerage and gentry of Great Britain, paying particular attention to the Beaufort line and how they fit within the House of Plantagenet. Mrs. Crozier seemed pleased with Kat’s progress, but stated she still had much yet to learn. All the same, as a pupil, Kat did impress, her memory excellent.

Upon her dismissal, Kat glided carefully from the parlour, stepping softly with feet aligned, then dashed to her dressing room and changed into a riding habit, elated by the promise of an almost entire day of freedom. She had toiled arduously through her lessons for several weeks to win this boon, and allow her to meet her brother and his wife on the road from Bridgewater. Their visit would be a delight after the strict training regimen under the ever-vigilante Mrs. Crozier and ongoing daily instruction with Miss Nestor. Kat marched through the front hall and, after petting Cinders and waiting for a footman to open the door, hurried out to the sunshine of a beautiful spring day. She glanced at the nearby windows to determine if the decorum matron might be watching her, but couldn’t see anyone peering through the panes.

A sorrel gelding stood ready for Kat. She briefly checked the girth and stirrup length, deciding to adjust the latter a hole longer. Thanking the groom, she took the reins and led the animal to the mounting block. Quickly upon the horse, locking her legs into the pommels, she kept at a fast walk around to the shade of the lane, then tapped the geldings shoulder to take it up to a canter. Following the lane to the village, then the road north-east (the only proper carriage route over the Quantock Hills), she expected to meet her brother and his wife as they came from Bridgewater. Walking her mount slowly up the wooded valley, she emerged onto the open high country. After about a further twenty minutes of alternating between a canter and a walk, pausing to explore a few places she’d played as a child, Kat saw a pair of carriages approaching. She reined in and moved off the road. When the first carriage trundled near, a small landau with the tops folded down, she recognized her brother and his wife, Jack and Phoebe, and waved.

“Hellooo!” Kat dismounted with a jump from the saddle.

The driver drew the carriage to a halt directly in front of Kat, who kept her gelding well to the side on long reins so it could graze on the lush spring growth. The second carriage, a large enclosed coach pulled by a team of four, stopped in turn. Jack climbed down from the landau, then put out a hand to help his spouse.

“Nice to see you, Kat,” Phoebe declared. She stepped forward for a hug.

“I’ve been so looking forward to your visit!” Kat smiled. She held the embrace for a moment, then eased back. “You look splendid, Phoebe. Where’s my nephew? Where’s little Jack?”

“There.” Phoebe indicated a basket with a protuberance of blankets. “Sound asleep.” The woman stood quite a bit shorter than Kat, pleasingly proportioned, a brunette with round blue eyes and a small mouth, usually wearing a slight smile. She carried an air of wisdom, despite her mere twenty years. Favouring dark colours with high sheen, today she wore a deep blue silk travelling suit.

“My turn, I suppose?” Jack looked around with a cocked head, stooping a bit, holding his cap, his thick brown hair dishevelled. He wore a woven country suit and cloth gaiters, making him appear a much simpler man than he really was, perhaps an affluent farmer.

“How is the Honourable Jack Beaufort?” Kat asked as she hugged him. “You look like you’ve been eating better.” She could see he’d started spreading out, no longer frightfully thin. He was beginning to show his almost thirty years, a face now framed by thick sideburns, and some wrinkles around his eyes. “I wish you could have come to London with Phoebe at Christmastime. I’ve missed you.”

“And I’ve missed you. You have my dear wife to thank – for taking me away.”

“Oh! Now that isn’t fair,” Phoebe said, giving him a light tap with her parasol, but laughing cheerily while doing so. “I enjoyed the six months we lived here. You chose Hastings for our home. He has a vast workshop there, Kat. You would find it fascinating.”

“Yes, you should visit,” Jack suggested.

“I would dearly love to, and assay all your inventions. I miss how we used to work together, even when it ended in disaster! What have you been creating?”

“Too much. You don’t know what a great help it would be to have you there,” Jack said earnestly. “I have brought some drawings and items for you to examine. I need your imagination Kat, to get–”

“Please!” Phoebe said looking skyward. “Business later. Let us be on our way. There are gypsies camped just up the road. Several wagons of them.”

“Aye, should move along, sir,” the driver said. “We’ll unsaddle the young lady’s horse and tether it behind the coach. Then you can ride together?”

“Very good. See to it, please.” Jack nodded. “It’s true, Kat, you probably shouldn’t ride alone. Those gypsies could be trouble. I remember them passing through here often over the years. They camp in and around the old hill-fort.”

“Yes, that’s it. There’s adequate shelter from the wind and plenty of dead fall for fires.” He smiled slightly. “I seem to remember you making an encampment there when you were nine or ten.” He chuckled.

“Now, you needn’t bring that up!” Kat laughed at the memory and embarrassment. “I was making a brave attempt to view the spirit of Jane Walford. But tell me, are they real gypsies? From exotic lands? Or merely Irish tinkers?” She felt extremely curious. Could they be from far, far, away? Egypt? What sights they would have seen.

“We’re not prepared to learn in either case,” Phoebe declared. “Come and sit with me, we’ll get caught up on all the news.”

On the journey, Kat and Phoebe maintained a conversation, taking turns holding the baby, while Jack gazed distractedly at the countryside and occasionally scribbled in a notebook with a pencil. The big news, that Earl Beaufort would soon be entering a courtship, Kat kept to herself. It occurred to her, if memory proved accurate, that Miss Primrose was younger than Jack, and it may be an awkward situation. When they rolled up in front of the manor, the earl stepped from the old front door to greet them, following the carriage as it stopped by the main entrance.

Pleasantries aside, father and son disappeared through to the east wing. Kat and Phoebe were left watching the luggage unloaded from the coach, a nurse emerging to care of the baby.

“Something significant?” Phoebe asked with a raised eyebrow.

“I may not be the most perceptive person, but I can certainly tell by your father’s face he wanted to discuss a serious matter with Jack.”

“He’s going to court someone.”

“That’s wonderful!” Phoebe exclaimed. “You must be happy for him. He’s been alone for…” she paused, flushing.

“Yes, thirteen years.” Phoebe softly placed a hand on Kat’s shoulder for a moment, then went on. “He could father more children. And you shall have a mother and little brothers and sisters. Who is the lady?”

“What is it? What are you thinking?”

“Yes, I believe she’s four or five and twenty.”

“Why are you worried?” Kat asked. “I can tell something’s troubling you.”

“It’s Jack. He… he lives as though he has no title, and won’t be earl. I don’t believe he’ll ever take a seat in the House of Lords.”

Phoebe started walking across the front lawn, away from the men tending to the horses and baggage. Kat followed, feeling concerned for her sister-in-law.

“What is it?” Kate took hold of Phoebe’s elbow, bringing them both to a stop.

“Things haven’t turned out as I’d planned, and… it’s… I… I feel a great responsibility, to bear more sons…”

“To carry on the Beaufort line. It’s such an old name, and tied to Somerset so deeply. Oh, dear. If Jack doesn’t accept the title, everything may fall to your cousins, the Seymours.”

“Indeed. I’ve been studying all that for weeks. I wrote an essay about it this morning. Wouldn’t little Jack become earl?”

“If he survives childhood. He doesn’t eat well, and… is… seems prone to biles and coughs. Jack doesn’t think on these matters, I have to.”

“What does this have to do with Miss Primrose?”

“Nothing, really, it’s not her worry. Not at all.”

“If she bears a son, he could become earl.”

“Yes,” Phoebe nodded. “You’re correct. I shouldn’t be overly concerned. Promise not to mention this to anyone?”

“Give me a hug. Let’s go in the house.” Phoebe examined Kat’s face. “You’re becoming more a young lady with every passing month. Have you grown out of your wild mischief making ways?”

“I never meant to be wild, or make mischief.”

“Then no one can find fault with you. Come, help me unpack and lay out my gowns. And all Jack’s garments need attention. He doesn’t know anything about maintaining a wardrobe…” 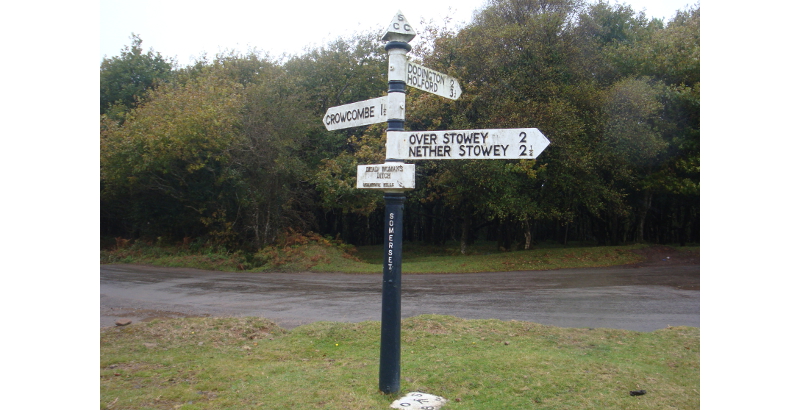 The crossroads at Dead Woman’s Ditch.