Kat found a general air of tension existed at first. Jack acted completely indifferent to their father’s news, a disinterest that came across as quite sulky. Phoebe and the baby took control of the situation, the former guiding conversations, the latter receiving an excessive amount of attention.

Jack was keen and curious about Kat’s assessment of some pistols he had been tinkering with for several months. He’d brought an assortment of unusual weapons for her to handle. Instead of normal pistols, these were built with various rotating features, to provide anywhere from three to six consecutive shots. Jack had modified them all to fire using a new style of hammer with percussion caps, and there were different loading requirements. Kat wanted to get out and test them, but Earl Beaufort decided it would have to wait a few days while he and Jack spent some time ensuring the spring planting ran to schedule.

The men went hunting together a few times, the ladies observing from a distance. Normally Kat would have joined in, wielding a small calibre carbine since she was eight, but the earl insisted she keep Phoebe company. Jack had taken to wearing spectacles, and could no longer find the prey. Even from a hillside, looking down along the walls and into the copses, Kat could see the creatures her brother missed. Their father still performed as a decent marksman, but Kat knew she could easily out shoot either man. 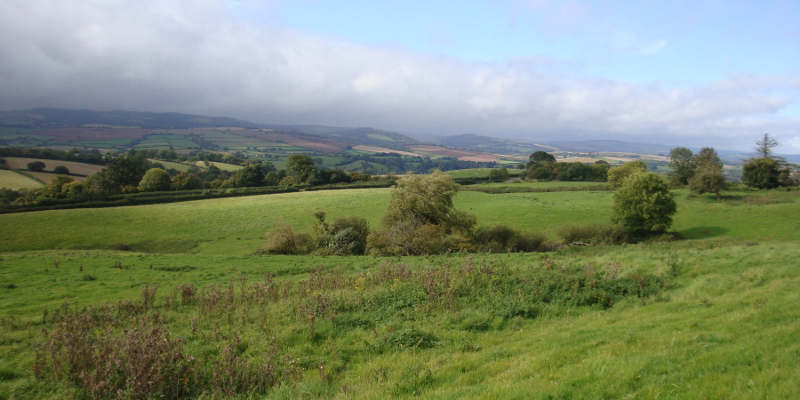 The fields by Quantock Hall, the hills of Exmoor stretching in the distance.

Finally, after what felt like an eternity to Kat but was actually five days, they went as a party with Jack’s pistols to the field behind the manor to test the weapons. A table and chairs were provided by the game wardens, and refreshment brought up from the kitchen under the direction of Rudman, Earl Beaufort’s valet. While most gentlemen servants were foppish with affected airs and graces, Rudman was decidedly rough, a retired light dragoon, compact in stature, all bone and sinewy muscle, somewhere between forty and fifty years old, with a low brow, beady eyes, and a deep scar on his lips and chin. He dressed like a gentleman, donning two service medals on his left breast when formally attired, and knew how to behave, but otherwise acted more like an officer’s batman. Kat had exceeded him in height by her eleventh birthday.

“This will be interesting!” Earl Beaufort declared, taking up a pistol. “Oh… I say. This is rather poorly balanced.”

“Yes.” Jack kept a notebook ready, his spectacles on his forehead. “I haven’t fixed all the original gunsmith errors yet. Three of these are based on Collier’s designs, but there are models here from the Continent and America too. I’m concentrating on reliable firing and smooth multiple shots.”

“Ah, yes, the frontiersmen all carry pistols, don’t they. Lots of adjustments to make, hmm?”

“Certainly. I’ll perfect them, Father. Then start making my own.”

“Brilliant, my boy. These will be for our soldiers?”

“Imagine, your pistols used by our men throughout the Empire.”

A large log, with a red spot painted on the side, served as a target. From about twenty paces away Earl Beaufort raised a weapon and fired.

“I missed,” he said quietly. “I usually find the mark. Even with simple flintlocks.”

“You pulled wide on the draw, m’ lawd,” Rudman observed. As an old soldier his opinion held the weight of a professional.

She selected a smallish version with four rotating barrels in a brass colour. She grasped the handle as her father had taught her, but found it front heavy, so adjusted her stance. Holding the weapon with both hands she pulled the trigger; it was a long draw. She kept it steady, squeezing, and fired. It caught just the edge of the log. Immediately, she fired the other three rounds hitting close to the target each time.

“Ho ho!” Earl Beaufort patted her on the shoulder. “What a natural! Did you see that, Jack? She just shot four men faster than I could blink.”

Kat felt thrilled. Phoebe laughed and applauded, joined by Rudman and the game wardens who were standing a respectful distance away.

“That’s the idea,” Jack confirmed. “Please keep trying them, and give me your views on each.”

Kat happily worked her way through the eight models. After a few shots her father stood back and watched. One pistol wouldn’t fire at all, one jammed after the first shot, and two frightened her because ignited powder flashed out the sides of the rotating chamber. Four were deemed worthy of further development.

“They all have far too long trigger draws,” Earl Beaufort opined while having a glass of wine and dry firing the empty pistols.

Jack swivelled his head around to his sister, who nodded in agreement.

“The caps and hammers seem excellent,” Kat added, “but reloading is slow. You have more shots, but then there would have to be a long lull in a battle before you could use these again. And I don’t believe any of them would be good cudgels.”

“What an imagination!” Phoebe exclaimed. “How do you come up with such things, Kat?”

“It’s true.” Earl Beaufort hefted one by the barrels. “Nowhere near as good as a normal pistol.”

“So a way to reload quickly should be considered?” Jack made a note. “And they should make good cudgels?”

Kat thought a moment, taking a sip of cider. “Hmm… if I can reload quickly, I would never use it to hit someone. But truly, I think working on the trigger and rotation are the most important features.”

“I agree,” Earl Beaufort said, examining the jammed pistol. He set it down and checked his pocket watch. “Now, I must see to some business. Son, you should join me, it is estate matters that will one day be your concern.”

“Don’t be long, my land steward is waiting.” He stomped off down the hill.

Kat started fiddling with the smallest pistol, trying to determine improvements, finding the percussion caps small and tricky. Doing this with gloves on is next to impossible. Could soldiers manage this in a battle? I would probably drop more caps than I loaded–

“You can have that one, Kat,” Jack said, getting up.

“Truly? Thank you!” Kat suddenly appreciated the weapon much more. “It’s the finest of the eight. Are you sure you can spare it?”

“Yes, yes.” Jack shrugged it off. “They’re easy to obtain, a London smith crafts them. Expensive, but no concern. I’ve made some changes, and I believe I’ve learned all I can from that pattern. Here’s a tin of firing caps. Mind you keep them dry.”

“And use small charges of powder,” Jack continued while placing the weapons in satchels. “If it spills at all from chamber to chamber, all four barrels could go off at once.”

“Would that sprain my wrists?”

“Yes, or worse, the pistol could explode.”

“It is. Men have lost their entire hand when that happens. It’s one of the metallurgy problems I’m trying to solve.”

“Goodness. I’ll only fire it with Father or Rudman in attendance.”

“A wise precaution. Both possess a great deal of experience with guns. I’ll be sure to tell them how large a charge to use. Ladies.” Jack bowed, mostly to his wife, then headed back to the manor, a game warden stepping up and insisting on carrying the weapons, ammunition, and tools.

“My word,” Phoebe said, drawing near. “Jack told me he intended to give you a present, but I didn’t imagine it would be a pistol. Do you really like it?”

“Yes, of course,” Kat smiled. “It’s all the better because he made parts of it.” She waved to Rudman, who approached and bowed his head perfunctorily.

The man limped, having lost a portion of a foot in India, but it didn’t slow him down much. Rudman often duelled with Lord Beaufort and Kat, and had taught her much of what she knew about sabres and how to wield them. He smiled at her slightly. Kat guessed he was proud of her shooting prowess.

“Put this pistol in the gun-room, please? Oh, and this little tin, too.”

Kat and Phoebe hooked elbows and started slowly for the manor. The sun shone softly on their faces, the grass green and lush, the view of the hills lovely, the trees bursting with spring growth.

“We only had six months together, as sisters…”

“Yes. But life is full of changes, Kat. We must adjust, and carry on, doing our best.”

“I was still quite a little girl, I realize that now, even though it was only two and a half years ago. I… we would have more to talk about, as I get older, if I had questions…”

Phoebe stopped, glancing sidelong at Kat. “You can write me, whatever you like. I promise to answer any questions you may have.”

“Do you have questions now?”

“No. It’s just, sometimes I wonder about things… then forget them.”

“As they occur to you, write them down,” Phoebe said. “Then send them to me.”

“Yes, I will.” They continued walking. “When do you leave?”

“Three days hence. Jack has engagements in Town. Someone on Chamber Street near the Tower of London, and something in Whitehall. Then we return to Hastings. And you shall come for a stay? A holiday?”

“I would love that, dearly!” Kat nodded. “But I’m not old enough to travel alone, so I’ve no idea when I’ll be able to visit. Mrs. Crozier says a lady should never travel alone, whatever age.”

“I should think, if your father agreed, you could make the journey with your new tutor?”

“Perhaps. I don’t know. I’d rather travel with Miss Nestor. I wish Nanny, uh, Mrs. Farewell hadn’t moved to Town. Between lessons and decorum instruction… I’m tired, and worried about the whole arrangement with Mrs. Crozier.”

“I have noticed how strict she is – always glowering disapprovingly at someone or something.”

“She slaps me sometimes,” Kat said, just above a whisper.

“Do you cry when she strikes you?”

“From anger, and shame, yes.” Kat thought a moment. “Not from the pain. Father taught me to ignore pain.”

“I was constantly told stories about the brave Spartans.”

“I don’t believe Jack was!” Phoebe said wide-eyed in all seriousness.

“He was raised by our mother. Father would have been away most of Jack’s childhood, busy with government matters. I think he retired when I was two or three years old. Something about,” Kat adopted an officious tone to imitate her father, “pushing the Great Western Railway Bill through! And seeing construction safely under way!” She grinned at her theatrics. “Then he didn’t return to the House of Lords.”

“And does your father know of this punishment your tutor is meting out?”

“He witnessed it once. I heard him question Mrs. Crozier after I ran from the room, and it sounded as though he approved.”

“What had you done?”

“Spoke out of turn. Usually it’s when I get angry – don’t control my temper. I’ve been warned. I suppose I deserve it.”

“Ah… she is teaching you to be demure, restrained.”

“Now Kat, worry doesn’t do any good. You must consider the possibilities, make a decision, and be strong enough to see it through.”

“But what if someone else is making the decisions?”

“That too is part of being a woman. In some regards it makes life easier for us, we have less responsibility. When a man decides our fate we must accept it, then make the best of whatever outcome. If we’re blessed, only good men, fair and wise, make decisions which affect us.”

“Is Jack really fair and wise?”

“Hmm… well, your brother is kind, and caring, and leaves most decisions to me. He feels that is fair and wise. And I agree!”

“I will see about having you visit,” Phoebe said firmly. “Soon.”

“Thank you. It will be something to look forward to.”