Kate ran to the quayside, joining a growing crowd.

“Someone is in distress, Father!” Kate said over her shoulder. She looked down at the grey choppy water. “What’s happened?” she asked no one in particular.

Kate instantly felt her heartbeat thumping in her throat. She scanned the waves for any sign of a boy. Someone must save him! Why isn’t anyone moving? I’ll go in! She set down her handbag and started removing her bonnet.

“What are you doing?” Earl Beaufort demanded, having reached Kate’s side.

“A boy! He’s drowning! Someone must–”

“There ‘e is!” a gruff voice exclaimed.

Kate spotted a boy waving frantically, already well away from the quay. He’s far! Could I swim out there and back, pulling him? Against the tide?

A large black dog leapt into the water and paddled towards the boy.

People yelled loudly to the boy and cheered on the dog while seagulls screeched overhead. A rowboat appeared from somewhere farther along the quay, a pair of men pulling on the oars. 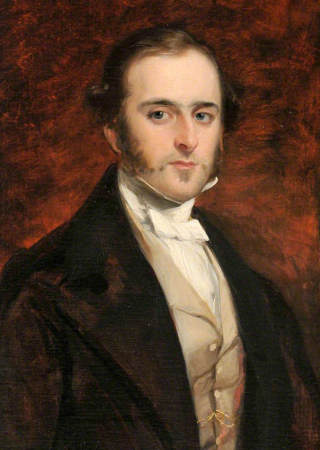 “What’s wrong?” Jane asked, approaching with Edward Herbert, Earl of Powis, who had hosted the Beauforts at Powis Castle, then travelled to Swansea with them and stayed in the same hotel for a night.

“A boy is out there!” Kate pointed.

“The tides are strong here,” Earl Powis murmured forebodingly. A man of about thirty years of age, impeccably attired in mourning dress due to the death of his father earlier that year, he gestured with one hand that they move on. “Perhaps we should afford the local people some privacy?”

“He’s gone under!” a child screamed.

A collective groan went up from the crowd.

“Sampson’s got ‘im!” someone exclaimed.

A joyful roar burst from the crowd.

“Hurrah!” Kate cheered. She could make out the head of the dog and boy, the former pulling on the latter’s collar.

Despite Sampson’s efforts the tide still seemed to pull him and the boy out into the bay. The men in the rowboat adjusted their angle and quickly closed the distance. People cheered, then fell into silence as the lifeless boy was pulled from the waves and placed on a folded tarpaulin. The men struggled to lift the dog from the water, then started rowing for the quay. The dog shook out its long fur, then barked, pawed, and nosed the boy. Everyone started shifting slowly along the quayside to the nearest set of stairs with their heads hung low. Some people sadly hugged each other and started to weep. Two little girls wailed is dismay. The Beauforts and Earl Powis didn’t follow, the men removing their top hats.

Kate felt her heart ache and throat constrict painfully. This is horrible. What a… oh! “Hurrah!” She burst with a little hop of joy when the boy sat up in the boat.

Everyone cheered and hurried for the stairs, their spirits buoyed by this fortunate outcome.

“How wonderful!” Jane declared, her face flushed. She slipped a fan from a long thin pocket of her skirt. “What a tumult of emotions!” She fanned herself. “Life and death and life again, all played out in a matter a minutes!”

“What a great dog!” Kate exclaimed, altogether too loudly. She copied Jane and deployed her fan, took a calming breath, then said, “Father, would it be appropriate to award the owner of Sampson some sort of prize?” I’d like to hug that dog!

“I’ll just be a moment,” Earl Powis said, quickly polishing the coin with his handkerchief. “You needn’t consort with the commoners.”

Kate watched Earl Powis edge around the crowd, trying to engage people in conversation. He’s a timorous little man. Pleasant… but rather ineffectual. People parted and Kate saw the boy, dripping wet and crying, receive a few sharp slaps from a woman, then an embrace as the woman collapsed to her knees, the two little girls joining them. Sampson stood by panting, a round pink tongue in a morass of black fur, his tail slowly wagging. Earl Powis appeared beside the dog, matching the fur in his mourning dress, distinct among the subdued grey and brown clothing of the labourers. The Beauforts glistened and glowed in their brightly coloured silk suits with gilt buttons and elaborate embroidery, standing about thirty paces away, and Kate realized it was probably wise that they remain distant in this circumstance. We don’t belong. I’d still like to hug that dog. Everyone clapped enthusiastically as Earl Powis handed a shiny silver coin to a grizzled elderly man. The crowd started to disperse. 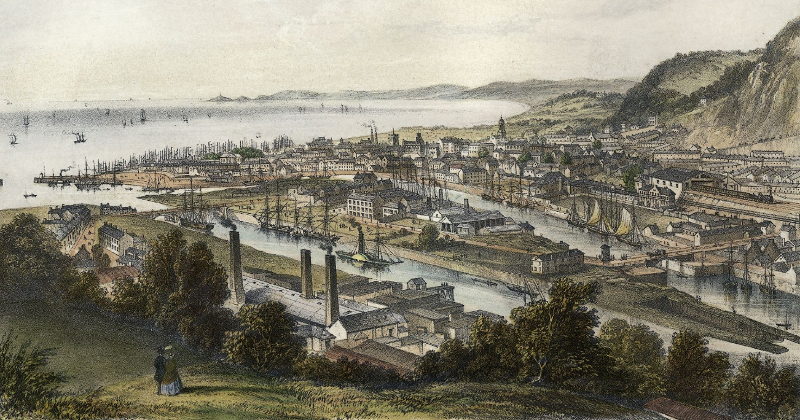 Swansea 1850, engraving by Newman and Co. of London.

“What sort of dog is that?” Kate asked as Earl Powis returned to their party.

“A Newfoundland dog,” Earl Beaufort replied. “They save people from drowning often. Sailors keep them. Let me guess… you’d like one?”

“A beautiful animal, with a glossy black coat,” Jane added, taking over the conversation and leading the way along the quayside. “You’ll have to come and stay with us, my lord. We could…”

Kate followed, strolling beside her father, but didn’t listen to the ensuing conversation. She peered out at the choppy waves of the grey sea, replaying the rescue in her mind’s eye.

“Were you going to jump in after that boy?” Earl Beaufort whispered.

“I thought… I might,” Kate admitted, sensing a tremble. “Until I saw… how far…”

“I’m glad you didn’t. The dog wouldn’t have been able to save both of you. If you had gone in, either you or the boy would have drowned.”

“Perhaps I would have swam out to the boy, kept him afloat until the dog came, then waited for the boat?”

“Consider a moment how cumbersome your clothing would be when wet. I know you’re strong, but you’re not that proficient a swimmer.”

Hmm… I need to practise.

“You may be fine in a pond, like at Chatsworth House,” Earl Beaufort continued. “But you have to promise me, no heroics in the ocean.”

“Yes, Father. I promise.” That pond in the garden was nothing – I could stand in it. But what if it had been deep? Or I fell in a deeper portion? My petticoats were very heavy. I must become a stronger swimmer.

Earl Powis, who had been guiding the Beauforts on a tour of the Swansea quays and related industries, led them to the side-wheel steamship that would take them across the Bristol Channel to Watchet. Their personal servants stood by waiting, having seen some of the baggage placed on the ship, while the rest of their servants would travel by land with their coach and other possessions. The Beauforts could be home late today, the sea voyage of about fifteen nautical leagues expected to take a little over five hours. The coach would require three or four days depending on the roads and weather.

Inky black smoke billowed from the flue of the steamer, indicating an impending departure, as Lord Powis bid them a safe journey. The Beauforts and their servants boarded. Kate strolled the deck, wondering about the engine of the ship and speculating on how much horsepower it might produce. The crew cast off and the ship turned slowly away from the quay, then surged forward and gained speed, heading into the bay and the channel beyond. Waves splashed the hull, and seagulls reeled overhead. Kate stood near the bow, peering at the various nautical crafts passing to port and starboard. Her parents approached. They carefully held tin mugs. Kate caught a whiff of coffee mingling with the salty sea air.

“There are hot and cold beverages available for passengers,” Jane said, taking a sip. “Would you like something, Kate?”

“No, thank you. Perhaps later.”

“Once I’ve hired a carriage, I thought we might visit Orchard Wyndham to see how the Dowager Countess is faring,” Earl Beaufort said. “It’s over three years since Egremont passed away.”

“Last summer she was still in mourning,” Kate said. “The Lovelaces and I called on her the day we drove from Ashley Combe to our house. She appeared happy to watch the children and me play in her garden and folly.”

“Hmm… in her middle forties, I should say,” Earl Beaufort replied. “I think she might have been sixteen when wed. That was in the autumn of Twenty. She is certainly a wealthy widow. Egremont left her everything – his line is extinct. I highly doubt she’ll ever marry again.”

Earl Beaufort put his arm around Jane and gave her a squeeze. Kate, knowing Jane to be barren, tried to display a sympathetic little smile with raised eyebrows. She watched her parents stroll away until they moved out of sight, then looked once again at the expanse of the sea and distant Exmoor coast, lost in thought.

Almost everywhere we have visited this summer has included death, one way or another. I have seen mourning dress worn by someone all the time. Perhaps I should have a mourning wardrobe. No… I would be inviting the death of a family member – that won’t do! There is the black gown I wore for a few funerals… probably too short now. Ah, my black velvet walking suit would be fine for cold weather, but not is this heat. I need a black summer dress. Why? Stop thinking about death. I must live life to the fullest, and accept the inevitable as it comes.

It will be good to get home – to run the forest trails with Bonny and ride o’er the hills on Misty! On hot days I will practise swimming in the pond. And Father said something about shooting on the Glorious Twelfth. There is still much of the summer to enjoy!

Mourning dress examples circa 1850s, from a fashion print, a painting, and a museum.