It seems no one would be caught outside without a hat throughout the 1800s, in particular the wealthy, who could afford different head wear for every occasion. The unwashed masses made do with simple bonnets or head kerchiefs for women, while men wore peaked caps, tams, and knit toques. Worn every day and hardly ever washed, often the home of head lice, these articles would often be thrown in the fire every chance a newer hat could be acquired. By the early Victorian era the industrial revolution and Empire building had brought up the standard of living throughout Britain, hats became obtainable to an ever growing middle class, and with that demand greater variety created. This article won’t cover all the various female headdresses available at the time, but concentrate on the most common from about 1837 to 1860, and what the wealthy would have worn.

The indoor cap was a small doily-like covering worn by married women at the back of their heads. (In previous decades it had been more elaborate, covering the whole head.) By 1840 it was generally a lace and ribbon frill, made of linen, it could be left on when going outside with the addition of a bonnet over top. For fancy affairs this cap could match the dress and become a more decorative item, made of rich materials. 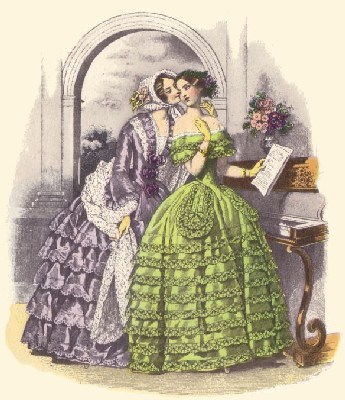 This fashion plate from 1857 shows an off the face bonnet, a lacy cap, and a sun hat on the little girl.

The bonnet, made of anything from linen to straw to silk to cotton to felt, was crafted to cover a woman’s head and usually shield her face from the sun. Pale complexions were considered a sign of health and wealth. These bonnets started the era with quite stiff bare brims, but evolved to include ruffles and frills harking back to the Regency styles.

Kate Tattersall wrote of wearing bonnets, and there are entries in her ledger for the purchases. Buying hats every few months, to match each new outfit, she passed on old items to servants and the parish poor. Milliners would also buy back used items and recycle the decorations, then sell the stripped down slightly worn hats to poorer customers.

Winter wardrobes often included “beaver bonnets” which were heavy, quite waterproof, and crafted from the felt of beaver fur. The underhairs of the pelt were shaved from the hide, pummelled and boiled many times, until the mass became a thick felt. These bonnets sometimes had bright fabrics sewn to the outside, lined with silk or velvet, and must have been very warm. While the gentlemen were freezing their ears wearing top hats, the ladies were covered up and cosy. 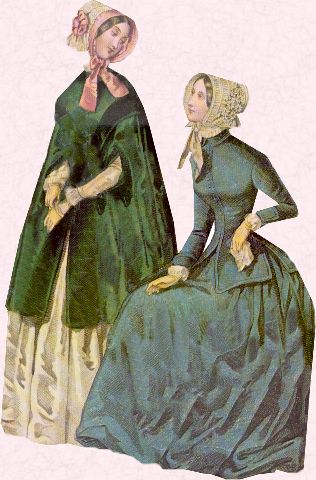 This 1838 fashion plate shows a couple relatively plain bonnets. These are modest women in simple attire. 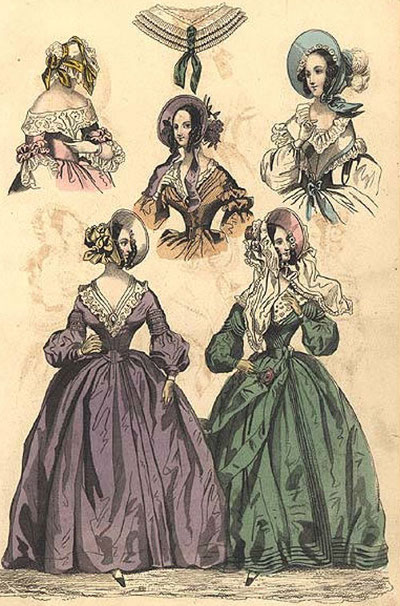 An 1839 fashion plate further reveals the variety and gives some indication of the decorations applied. The outfits (summer dress) reflect a Parisian influence.

Throughout the late 1840s and early 1850s the brim of bonnets became more decorated (silk flowers in demand) and shorter. Parasols grew increasingly popular so the brim of the bonnet wasn’t as important for screening the sun. Of course many ladies kept to the older fashions and, like today, there would have been a great variety of bonnets worn. 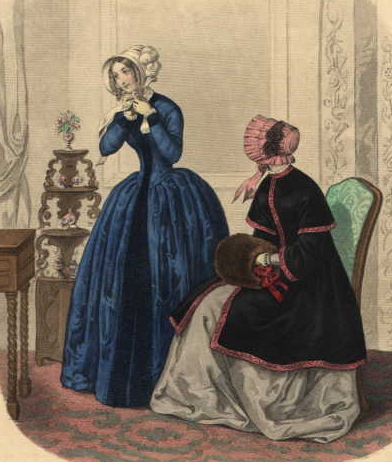 This fashion plate from 1848 shows a ruffled brim. 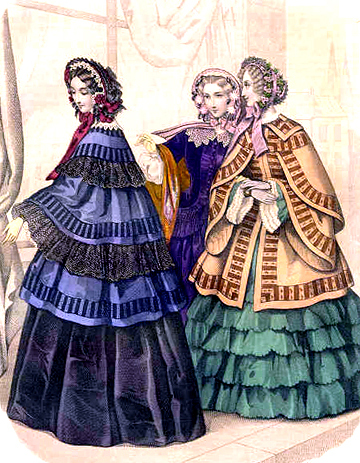 This 1853 plate provides a very good example of the short brimmed bonnets with lavish decorations. 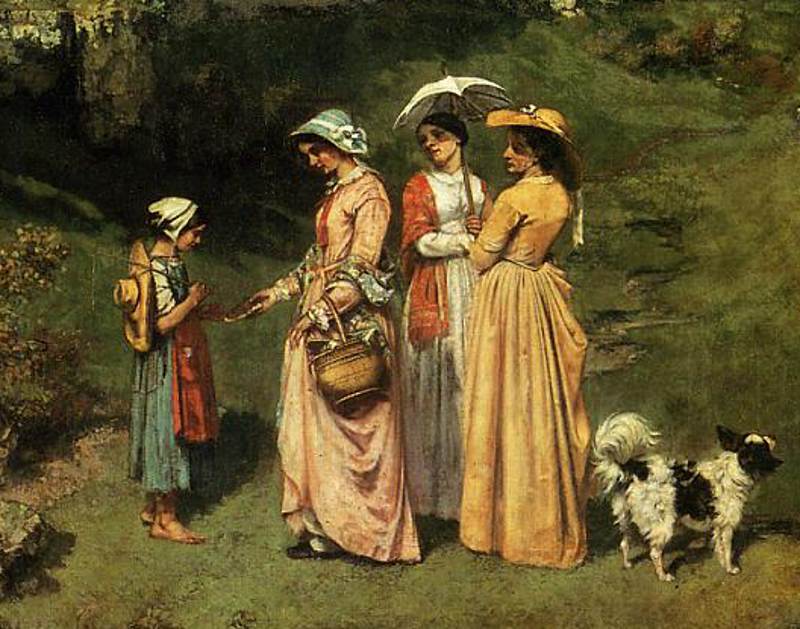 In this study of an 1852 painting by G. Courbet, The Young Ladies of the Village Giving Alms to a Cowherd, there are excellent depictions of a cloth cap, and a bonnet, but also two straw sun hats, which will be featured in the next article. Note the lady with the parasol doesn’t appear to be wearing a hat.

In this painting “The Railway Station” by William Powell Firth, 1862, we see the ladies are all in short-brimmed bonnets, the gentlemen mostly in bowlers and toppers, the children in various sun hats and tams.

Part 2 will cover the other common women’s hats of the early Victorian era.