“Coming Out” During the Early Victorian Era; about debutantes 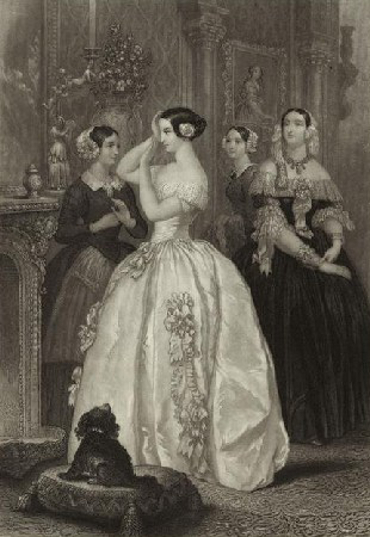 During the Regency and into the Victorian era, the London social season was particularly busy from April to the end of June, but events were held throughout the winter, starting when Parliament returned in late January and included military reviews, dinner parties, and charity events, and went on to the end of July. Débutante (French for female beginner) balls were a highlight, hosted at the grand houses of the aristocracy. Lord Byron referred to these galas as marriage marts, because it was the best venue for young ladies to encounter possible suitors. There were very few upper-class public social venues in London open to both sexes. An exception was Almack’s Assembly Rooms, which opened in 1765, and admitted both men and women. Other popular meeting venues included the parks and gardens, in particular Hyde, Green, and St. James’s, where nice Saturday afternoons drew enormous crowds. Once wealthy young ladies were “out” they were expected to “ride the parks” and show off their fine statuesque figures, while mounted on magnificent expensive horses, accompanied by a parent, a brother, or a groom. By the end of June, London was so hot and smelly, everyone with a country estate would flee, but the coming sewer systems, and grand new neighbourhoods with improved wash rooms, would make the capital all the more bearable by the late 1860s. Young Queen Victoria happily embraced the gaiety of her uncles George’s and William’s reigns, but grew more prim and proper as she had children, then stricter upon the death of Prince Albert. She remained in mourning for the rest of her life, and demanded greater moral standards with each passing decade.

Court presentation in the Queen’s drawing room, St. James’s Palace, 1843, by Sir J. Gilbert. While it is a formal ceremony, it appears quite casual compared to what evolved during the later decades of the 19th century.

The presentation of débutantes at court during the early period of Victoria’s reign, known as the “coming out” ceremony, coincided with the start of the London high social season (just after Easter). Two or three days would be set aside for the presentations, about one to two hundred girls each day, queueing up in their carriages outside St. James’s Palace (later Buckingham Palace), carrying bouquets and dressed rather like it was their wedding day. For much of the 1800s wedding dresses were actually simpler than court gowns, brides often selecting something that could be worn again, even dark coloured travelling suits acceptable. Later in the century some women had their presentation outfit altered for their nuptials, and the modern wedding dress is probably a direct descendant of the white silk débutante court gown. Applications for young ladies inclusion in the coming out ceremony were required to be made by ladies who themselves had been presented to the sovereign when they were young, often the mother, grandmother, step-mother, or someone else known by the family; the higher in aristocratic rank the better. Married and older ladies, but no one who’d been divorced or had a previous marriage annulled, would also be presented at court as their social status changed following the same protocols, but not as débutantes, then they could attend court balls or functions. 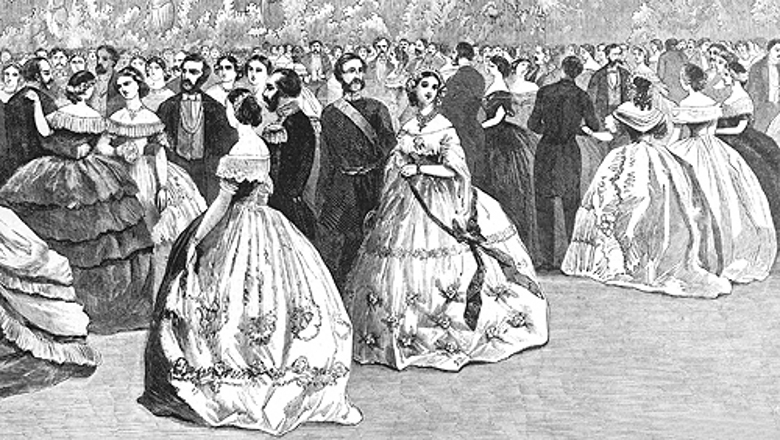 An elegant ball. Judging from the gowns, and facial hair of the men, this is from the early to mid 1850s.

Note: While it was expected that débutantes of the aristocracy (including knights and baronets) would be presented at court during their coming out season, only daughters of the clergy, of military and naval officers, of physicians, and of barristers, were also eligible for this honour. However, there were numerous other girls coming out in any given year, some fabulously wealthy, who attended balls, parties, teas, &c, but weren’t presented to the Queen and didn’t attend court functions. If they married well, and their husband met the criteria, then they could be presented, but not as part of the débutante ceremonies.

The débutantes were young ladies who had reached an age of maturity, completed an education, and were ready to be introduced into society. This meant the girl was eligible to marry, and the purpose was to display her to bachelors and their families for suitability. The age of maturity was not based on years. Parents considered their daughter’s physical and emotional development individually; a girl might be ready at fifteen, her twin sister at sixteen, depending on when she outgrew the awkwardness of adolescence. A completed education, and the quality of it, was also extremely important if the girl hoped for a brilliant match. An accomplished lady spoke several languages, played piano and sang, painted in watercolours and oils, did needlepoint, memorized every member of the monarchy, peerage, and gentry, including family background, and learned classical history and geography (and many could recognise all the various regimental uniforms and insignia, particularly daughters of military men). She also needed to be an elegant hostess, poised, and beautiful, while giving birth to as many children as possible. If a débutante went through the “coming out” process, including a presentation to the Queen and attending all the social functions, she was expected to be married within two or three years or considered a failure. A single woman at thirty was a hopeless spinster. (Life expectancy in England during the 1850s was about forty years. This average doesn’t take into account the thousands of infant deaths. Three out of every ten children died before their first birthday. Some people did live into their eighties or nineties, but the masses passed away relatively young. By 1900 the life expectancy was forty-five, with one in seven children not surviving to their tenth birthday.) 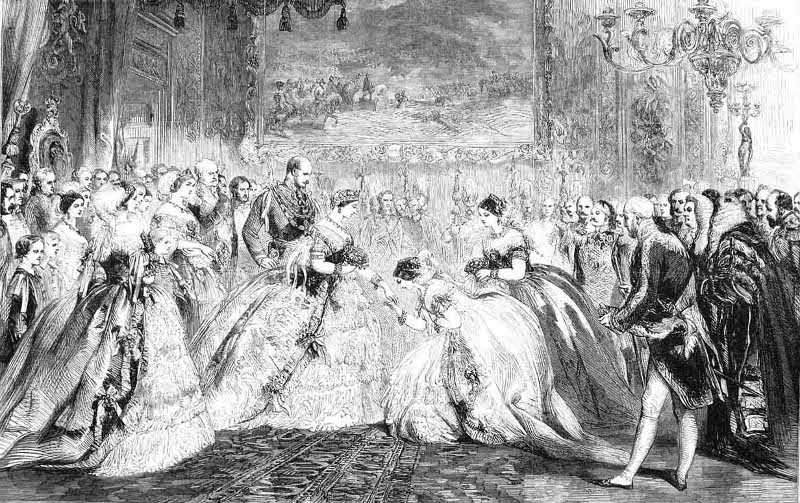 The Queen’s Drawingroom, ceremony of presentations, 31 March 1860, The Illustrated London News. This is still quite informal. Easter was on the 8th of April in 1860, so for some reason presentations were early on this year.

Only a handful of girls met all the criteria in any given season. The bachelors and their families understood the impossibly high standards that were set, and many noble gentlemen married common girls, who had not yet been presented at court but carried themselves better. These common girls would have “come out” at smaller balls, or country dances, and relied on their families and friends to make connections and move them up the social strata. A beautiful and talented girl might find a wealthy patroness, perhaps a dowager, to take her to London and show her off. Certainly the noble débutantes would have looked down their noses at these common girls, but also been jealous of them, especially when they landed a brilliant match. 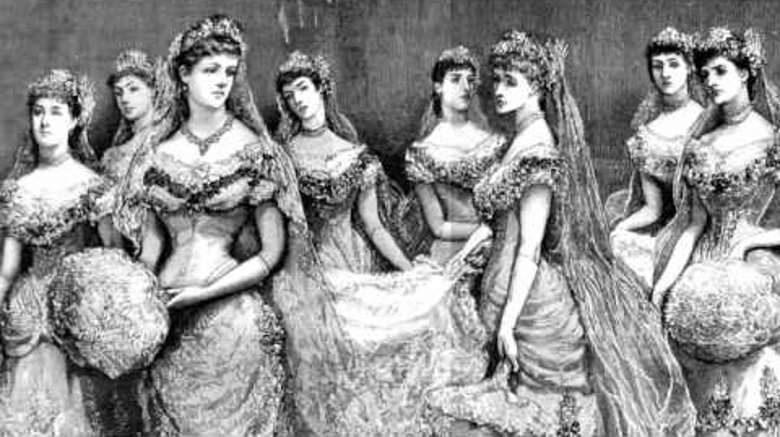 Débutantes waiting to be presented.

When a young lady was “out” she immediately started receiving invitations to all the events. A popular girl would be highly sought after, and gentlemen would “call” on her. This could be as simple as leaving their card. The men would make themselves available at balls, requesting turns on the dance floor, or invite her father or guardian to visit (hoping she would come with him), a walk (chaperoned), or dinner with each other’s families. These men were known as prospective suitors, and a dating process known as courting would follow. Some girls went through the first season with a fiancé already lined up, often arranged by parents for dynastic or monetary reasons. Courting could go on for years, including many different suitors, or be quite short, followed by a couple months of engagement and marriage. By the late Victorian era courting was expected to last at least six months, and an engagement of at least six months again, giving the couple much longer to contemplate a lifetime together. 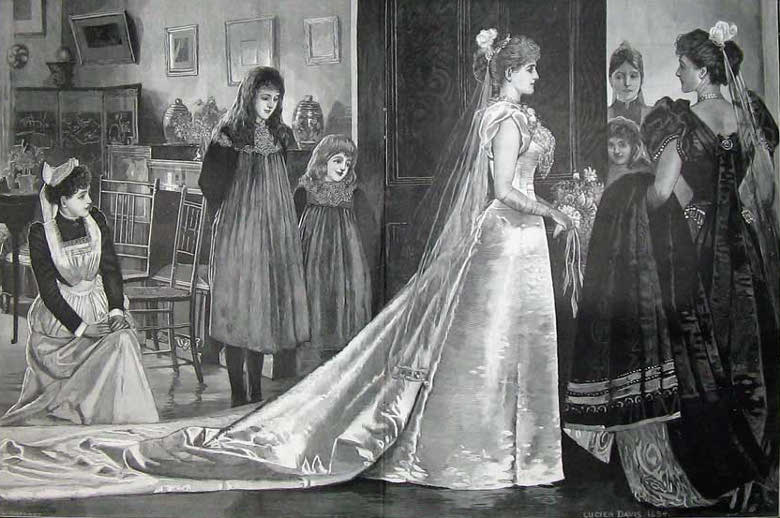 A mother and perhaps her eldest daughter ready for the presentation, little sisters and maids look on proudly. This would be late Victorian, when the nine foot train was a requirement.

As the 19th century wore on, the London social season shifted, traditionally beginning after Easter and ending with the “Glorious Twelfth” (12 August), the start of the shooting season for red grouse. This date had been established long before in 1831 with the Game Act, and specified the opening of various hunting seasons. The wealthy (whether peerage or gentry) all wanted to be back in their country manors for shooting and hunt parties, which served as another type of social season. Many a girl who didn’t shine on the dance floor, won hearts with her riding skills chasing a fox. Then there was always church, where a girl could sing angelically while standing advantageously, dappled in stained glass sunlight. By the late Victorian era the society rules had grown far more strict, including codes of conduct, books of etiquette, and further crushing standards for young ladies. The “coming out” process was only a small part of it all, and what had started as a simple meeting of court circle mothers and their eligible daughters saying hello to Queen Charlotte (wife of George III) ballooned into an expensive nerve-racking spectacle. Court presentations were suspended during WWI and WWII, then Queen Elizabeth II did away with the ceremony in 1958. When the announcement was made, 1400 girls were presented over three days, a great deal of them pulled out of boarding school to attend. 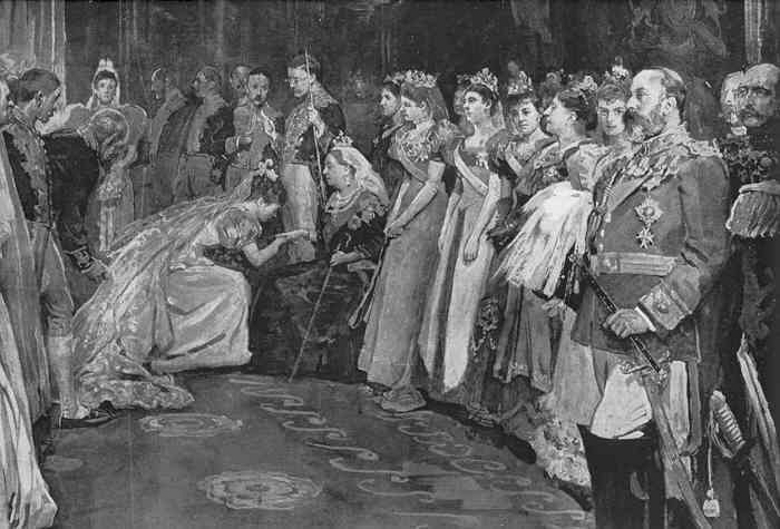 A coming out ceremony in 1893. Peeresses received a kiss on the forehead, everyone else kissed the Queen’s hand.

Some people have written a débutante had to be eighteen, but there never seemed to be a rule put in place. During the Regency and into the Victorian era the girls were as young as twelve, but it was a lot less formal during the early 1800s. The Queen’s eldest daughter was engaged at fourteen, married at seventeen, in 1855. (Kate Tattersall, nee Beaufort, was presented at fifteen, April 1849, and married at sixteen.) By the 1890s and into the Edwardian era a young lady reaching the age of eighteen of any particular year could have their “coming out” presentation. This had more to do with the evolution of the education system than anything else, with a complete modern schooling taking more time, so the girls getting older.

To read many articles from various sources, check out Courting in the Victorian Era.

The following list is just a smattering of examples gleaned quickly from the records of the Regency through to early Victorian eras. I could also quote from literature written during the times, but decided to stick with historical facts to provide an idea of the ages of aristocratic and gentry brides.

These girls were well placed members of the aristocracy and had likely been presented in the April a year or two previous to their marriage, but not necessarily. Based on what I’ve read, during the early Victorian era, the average age of an upper-class virgin bride was 19 years old; by the late Victorian era 21 years of age. 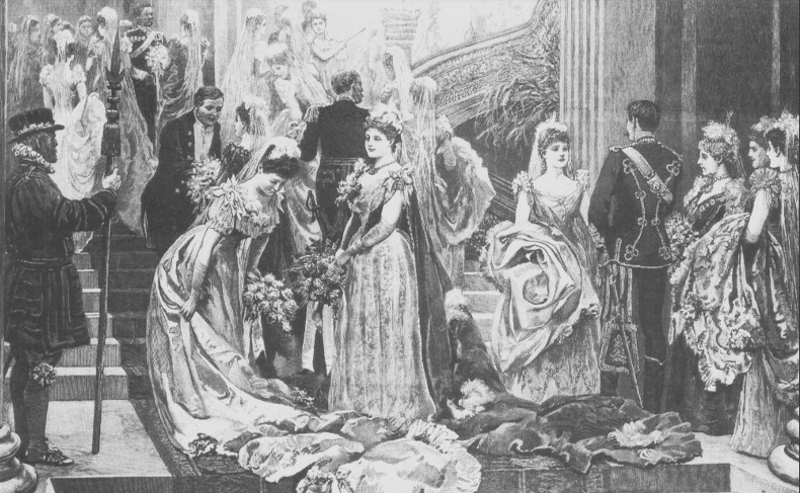 (Men were presented to the Queen as well, at events called levees, and it was a prerequisite to attending court functions.)

Upon request, you will receive an inscribed copy of Kate Tattersall Adventures in China with every donation of $10 or more plus shipping. Please send a message to  info@katetattersall.com to provide your shipping address and we will reply with your total.