Despite the popular belief, women did wear trousers in the 1800s. A search will find dozens of records of diarists who noted British and European members of the fairer sex in pants throughout Turkey, India, the American frontiers, Australia, &c. However, there is also evidence that women were having trousers made in Europe, Great Britain, and the settled portions of the Americas. Having blogged about the 19th century for a while now, I’ve come in contact with a great deal of enthusiasts. It is always enjoyable to receive a note from someone with an interesting question, or who would like to provide me with some information. This article was suggested by a curious young lady from Llanbadarn Fawr, Wales. I’m not an historian, but like to research, and approach any topic with an open mind. If you have appropriate period photos or artwork to add here, please send me a message through the contact page. What follows is a varied collection of images for whomever might be interested. Note: It was the Great War (1914-18) and the need for women to toil in combat, industrial, and heavy agricultural settings, that led to wide acceptance of feminine trousers for daily wear in the Western World, although it was illegal in Paris for ladies to appear publicly in pants without a police permit up until 2013. 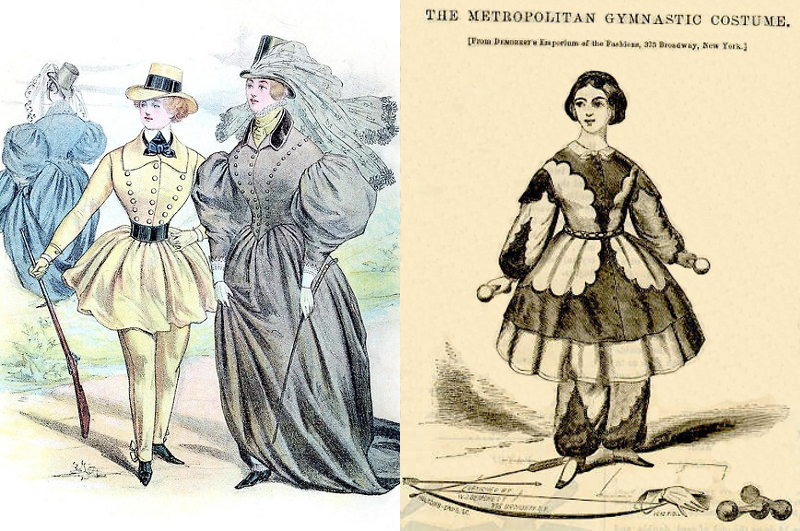 1835 fashion plate by Louis-Philippe of a lady’s hunting suit and riding habits, and an 1858 gymnastics costume from Godey’s Magazine. Note the habit skirt is drawn up enough to reveal the cuff of some kind of trousers. 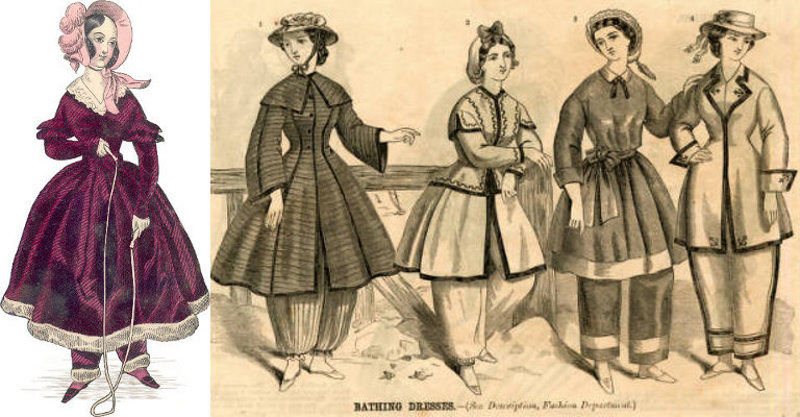 A crimson velvet fur trimmed play suit from 1838, and bathing suits from 1864, courtesy of Yesterday’s Thimble. 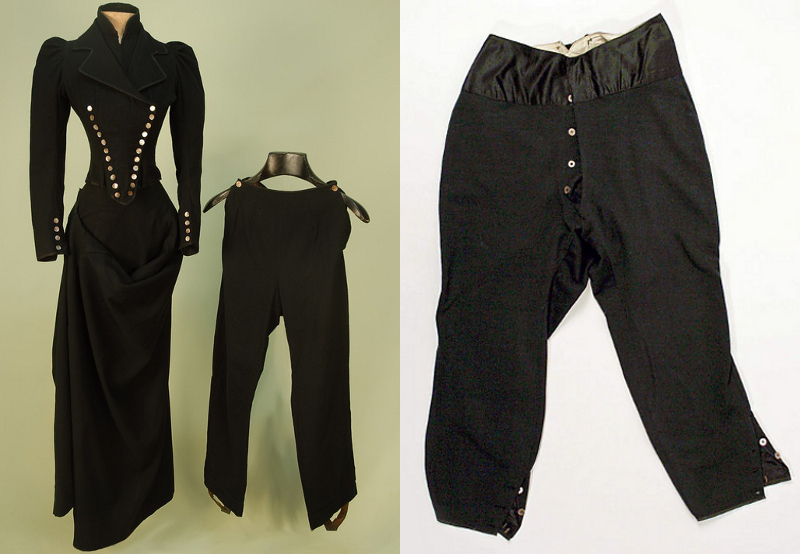 A riding habit with matching pants from 1885, and a pair of breeches, perhaps as old as the 1850s. The buttons on the left hand side on both legs are for riding side-saddle. These items are in storage at the Metropolitan Museum of Art, New York.

“At the meet, a friend introduced him to some ladies, one of whom, dressed to death, was mounted on a perfect hunter. Her costume was a blue habit edged with scarlet, with gold buttons down the front, white buck-skin trousers, and patent leather Wellingtons upon feet of exquisite symmetry. Easy to see that her habit came from Saville Row.” Who is the Heir, by Mortimer Collins, 1865. This sounds very much like the lady was wearing a habit crafted upon a man’s hunting suit, and looked fantastic. 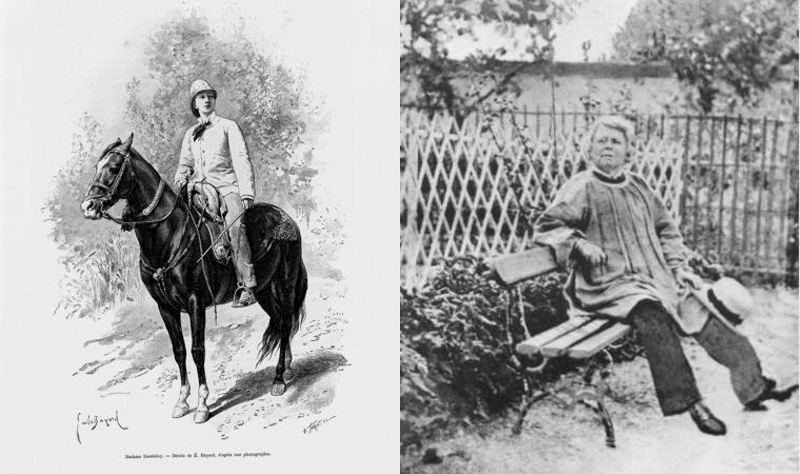 Madame Jane Dieulafoy (1851 – 1916) depicted in 1883, wore three-piece suits while travelling with her husband. Mademoiselle Rosa Bonheur (1822 – 99) obtained a special licence to wear trousers while working as an artist in Paris. The photograph here was taken in her garden sometime between 1880 – 90. 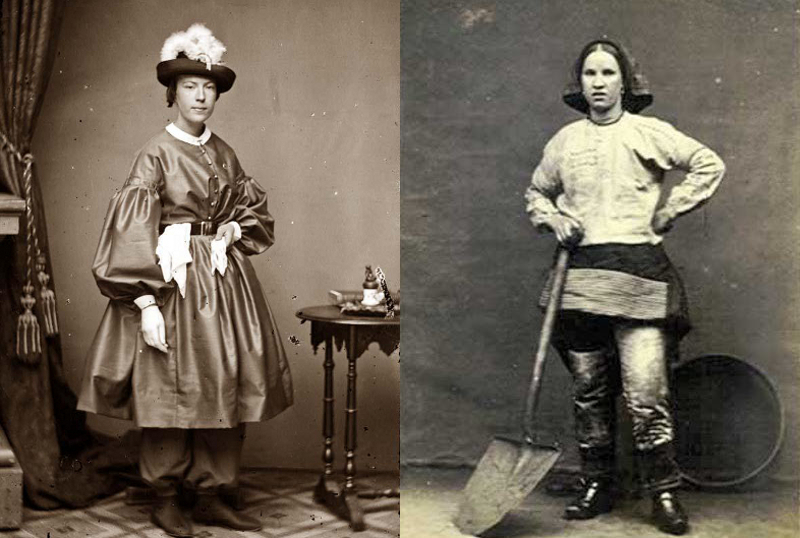 Mrs. Tibitts, taken in the 1860s, wearing a sort of bloomer suit, and a Wigan England coal miner (aka pit girl) from late in the 1800s. 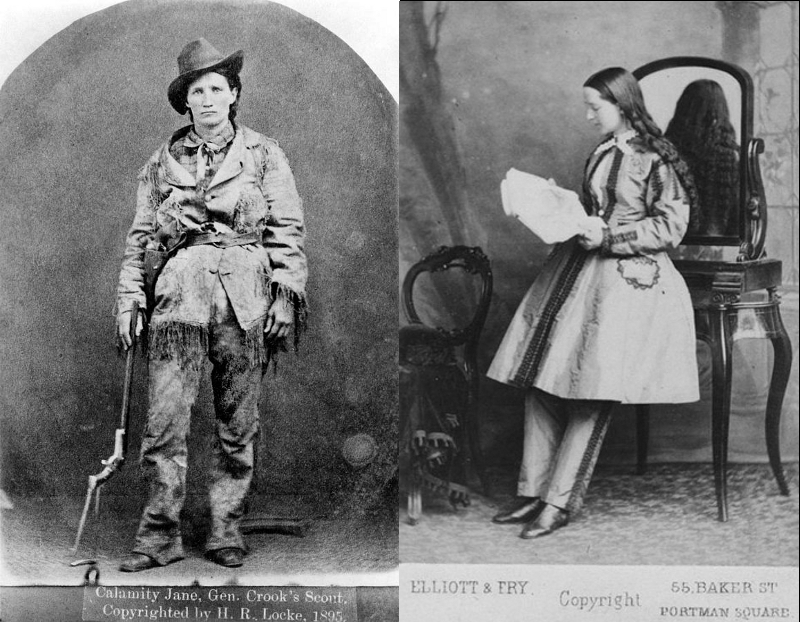 It is not known how many women donned uniforms and fought in the American Civil War (1861-65). Perhaps I shouldn’t include them here, but I feel they deserve recognition, and they definitely wore trousers. It is a safe bet that many adopted male clothes for certain tasks after the war. 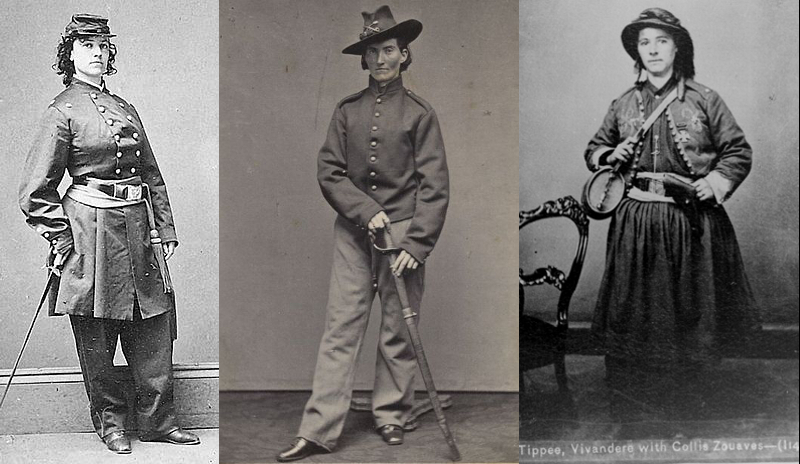 While mentioning women soldiers, the Vivandières have to be examined. The tradition of wives travelling with their husbands on campaign goes back centuries. Some time around 1700 the French Army formalized a system where certain wives were given the right to maintain a regimental canteen, which also brought them into the fold of military discipline. The word vivandière comes from vivand, meaning an article of food. Cantinière (from canteen) came into use in the 1790s, particularly with the French during their revolution (1789-99), but other countries favoured the old term. A canteen was a place soldiers could purchase alcohol, extra food, personal items like socks and handkerchiefs, perhaps bring their laundry and mending, or whatever else the women could do to make a little money and help look after the “regimental family” as a whole. In garrison the canteen may have been a room within the fort, or just a corner of the barracks, while on campaign it would have been a tent, probably set up near the cooks. 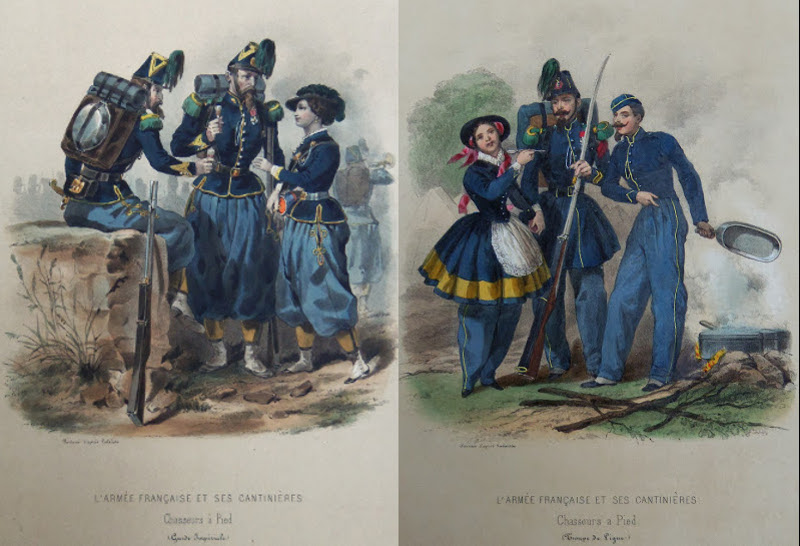 Two Chasseurs à Pied regiments. The one cantinière’s uniform is very much like the men’s, while the other is quite different.

Vivandières served with many European armies during the 1800s; Spain, Italy, Belgium, Austria, Switzerland, Russia, the Netherlands, and German states. The Dutch and Belgians called their female soldiers Marketentsters, the latter country allowing one per company, and there is a statue commemorating their service at Leopoldsburg, in the north-eastern Flemish Region of Belgium. The Austrian high command stipulated that their vivandières could march with the men provided they had no children and were supplying the troops with brandy, otherwise they travelled with the baggage train. 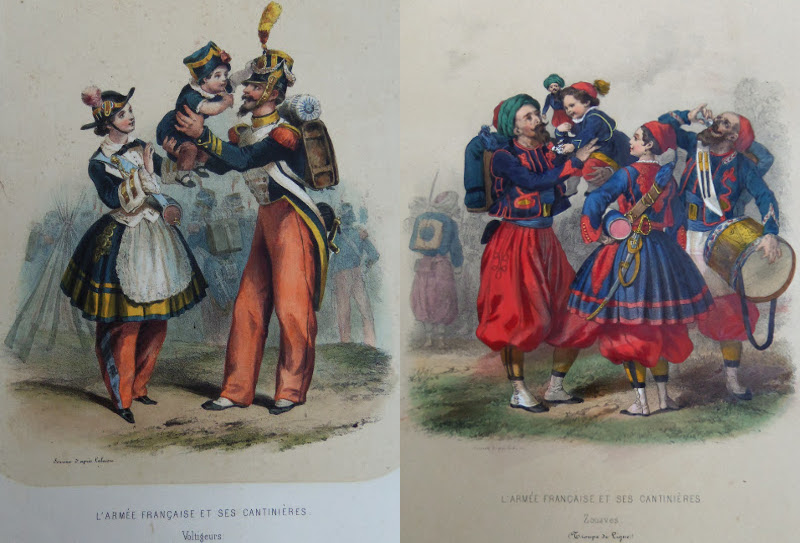 Voltigeurs & Zouaves. Note the small sabre on her hip.

Britain never instituted such a system, but did bring nurses to conflicts starting with The Crimean War (1853-56). Of course many wives and camp followers trailed any army, but they didn’t have the official status of the Vivandières. In France the tradition lasted until it was suppressed in 1906, and finally abolished when the positions were filled by disabled vets during World War I (1914-18). But the lady soldiers had been a common sight in their bright smart regimentals (which they started wearing during the 1830s) in any town with a garrison, and on any campaign, for over seven decades. Remember, at that time, soldiers wore their uniforms all day every day, seldom possessing any other clothes. The women’s uniforms were designed to match their husband’s regiment, but some were quite different, and most included a practical apron for canteen duties. The ladies were usually depicted with a brightly painted canteen (a small cask) hanging on their hips. 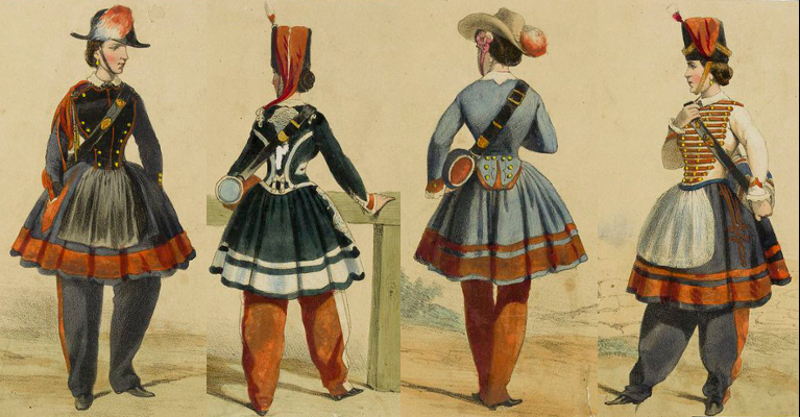 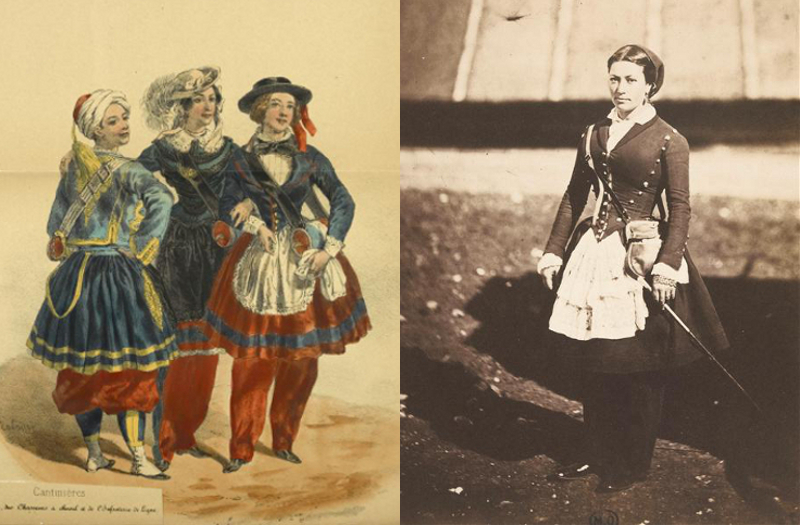 Cantinières by an unknown artist, and a photo taken by Roger Fenton in 1855 during the Crimean War.

If you would like to read more about the Vivandières and Cantinières please visit Thomas Cordoza’s website.

For dozens of images depicting women as soldiers check out Kate’s sister soldiers on Pinterest.

Note: Mass produced pants were usually made baggy, providing ample room for different physiques and upper layers of clothing to be tucked in, sewn by hand in the first half of the 19th century and then with sewing machines in the second half. Middle-class and wealthy people had their clothes tailored to fit close, following the contours of their bodies. Cavalry uniform trousers and civilian riding breeches ranged from quite roomy (but designed not to bunch up), to tight (providing support for hours in the saddle). 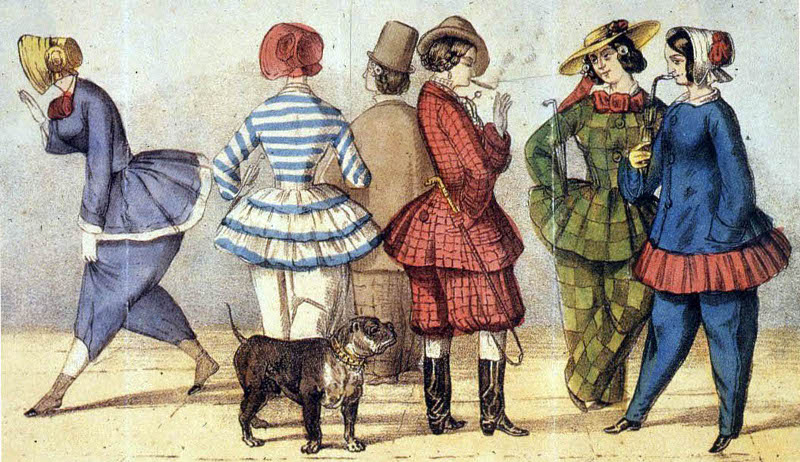