The term spatterdashes (also spatterdashers) goes back to the late 17th Century, referring to long leather leggings worn to protect stockings and trousers from spatters of mud while dashing about on horseback. Around 1770 the word gaiters came into use from a French word pronounced similarly. The item of clothing was adopted by labourers, made of leather, canvas, or other heavy material, for protection from dirt, thorns, and thistles, or crafted of thick wool felt for warmth. By the dawn of the 1800s the word spatterdashes started being shortened to spats, but the longer version appears in literature, journals, and newspapers, throughout the 19th century. It was even used into Edwardian times, but generally as one of those peculiar military words soldiers use around the barracks. 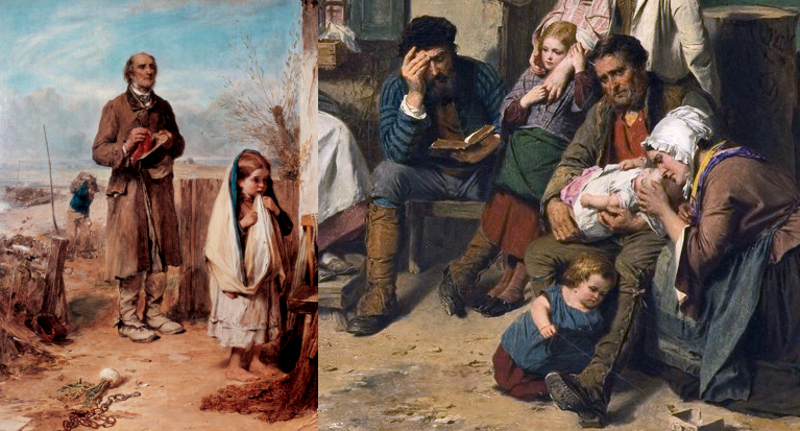 In these two studies of Thomas Faed paintings are examples of labourers in spatterdashes.

There were fine quality gaiters made of leather or cloth with expensive buttons for the wealthy to wear in cold weather. During the 1830s India rubber over-boots and shoes were developed. This footwear didn’t last well, were clumsy, and smelled bad, but the manufacturers continued to improve them with each passing decade until they eventually became popular and developed into rubber and winter boots, pushing gaiters out of the fashion picture. As mentioned above, soldiers wore spatterdashes as part of their uniforms. Fancy items were created for ceremonial purposes, but the majority were practical, serving in the same fashion as the labourers’ leggings. In the 1700s they often came to about mid thigh, worn with short trousers and long stockings, and in the early 19th century usually came to the knee, worn with breeches and stockings, layers added for the cold.

Spanish ceremonial from about 1780, British black felt from the Regency era, and Prussian from 1830, perhaps canvas.

Kate Tattersall liked spatterdashes, and wore feminine versions under her skirts for county walking, in cold weather, and when wandering in mountainous regions. She also wore high quality long leather pairs with brass buttons with breeches for riding. In the title of this article I have disguise listed. This is because while Kate donned these buttoned leggings for protection and warmth, she also used them to hide her very fine boots. At times she had to move through the dangerous underworld of Victorian England, so adopted the dress of a man, and hid her expensive comfortable clothing beneath layers of grimy outerwear. On these occasions she wore filthy waxed canvas spatterdashes, and her oldest boots with greasy mud rubbed onto the toes and caked into the welts.

A study of a painting by Sir Francais Grant, 1844, a fashion plate study of a shooting suit, 1861, and a study of a drawing by Mia Lane showing Kate in leather spatterdashes with large brass buttons and wool riding suit, set in 1850.