In one of Kate’s adventures she wrote about entering a dentist’s office, passing jars of teeth and several sets laid out on a table. I learned teeth were extracted from the dead to make dentures, so many were collected after battles, and came to be known as Waterloo Teeth.* Career soldiers carried “pinchers” (which amounted to heavy smooth-jawed pliers) specifically for pulling teeth from the fallen enemy and their cohorts alike.

The desperately poor also sold their teeth (and hair), particularly if they had a nice set and knew they might not have long to live. One cannot but feel deep sympathy for an eighteen year old with consumption allowing her teeth to be extracted with no anaesthetic for a paltry sum, perhaps to provide for a child or younger sibling. Real teeth were considered the best replacement for people who had lost their own. 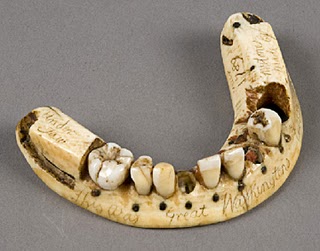 Depending on the depths of one’s purse there was a great deal of dentures to choose from. Starting in the 18th century with silversmiths and barbers, by the 1850s dentistry had come a long way. The use of anaesthetic allowed much more work to be done. All the same, it must have been horrendous, and the poor mostly had to live with rotten mouths. When teeth were scare, ivory and porcelain were used, both of which yellowed so weren’t as popular. Generally gold springs would be installed so the teeth pressed against the gums and could open for speaking. Most of these early forms of dentures were not designed for eating with; they would be removed. 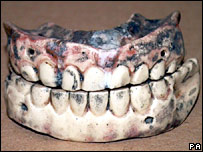 Porcelain teeth of the Archbishop of Narbonne 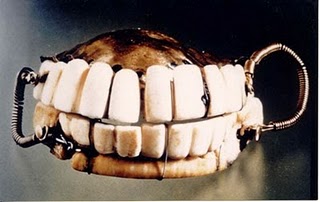 Some of the work was truly art, and it must have been interesting to see the rich with their fancy teeth. No wonder grave robbers risked arrest just to retrieve dentures, or a good set of real teeth. 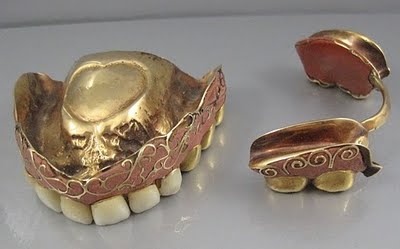 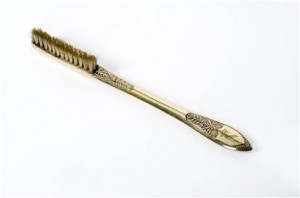 By the Victorian era, people had been cleaning their teeth for centuries, but it was in the late 1830s toothbrushes started being mass produced. The best were with silver handles and badger hair bristles, but ivory and wood were common with various hair used. Kate Tattersall listed carrying a toothbrush on more than one occasion. She wrote of having excellent teeth and caring for them. I have to surmise seeing people with decay and gum disease on a daily basis, and smelling their horrible breath, was a very good reason for being particular in this regard. Tooth powders and pastes were home-made or offered for purchase in stoneware jars; the common ingredients included: chalk, charcoal, cinnamon, burnt bread, burnt alum, myrrh, honey, sage, cuttlefish bone, cream to tartar, clover oil, dragon’s blood, &c. 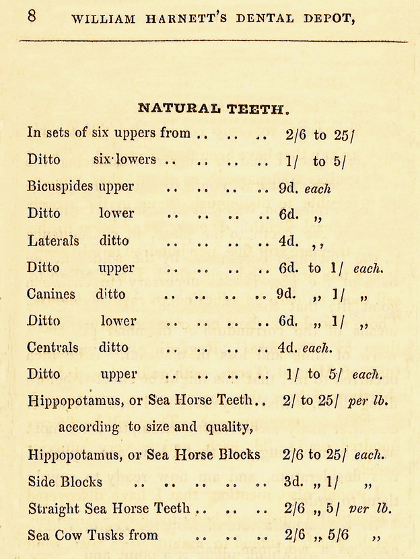 There were dental supply houses in every city. Harnett’s was located at 12 Panton Square, Coventry St., London. This ad appeared in 1851.

*The Battle of Waterloo (1815) saw about 43,500 men killed, most of who were buried in mass graves. Generally young and healthy, their teeth were pulled as part of the interment process. Barrels of teeth flooded the market and were shipped all over the world. British soldiers were expected to care for their teeth because they needed to be able to bite their cartridges open; every second soldier was issued a toothbrush and shared with their bunk mate. The earliest reference of the term Waterloo teeth I could find comes from February 1858, in the American Dental Review.