Drawers were not generally worn during the early 19th century by most British women. It was more convenient to wear long hose, stockings, and layers of petticoats under their skirts. Some women, particularly wealthy ladies who wore the very sheer garments of the Empire dress period, adopted men’s drawers (sometimes known as pantaloons) for modesty purposes. These were close-fitting and crafted of flesh coloured material to create an illusion of nudity under the dress. Women’s underpants were more popular in the New World where they started to be mass produced in cotton. By 1830 women’s drawers, or “trowsers,” were accepted by British women and examples and patterns of versions exist from then. It can be confusing when reading about clothes in those times because sometimes drawers and trousers are underwear, other times outerwear for men. In the 1840 book, The Workwoman’s Guide, patterns and advice is provided on how to craft drawers for everyone; both sexes of all ages, and it is definitely undergarments. 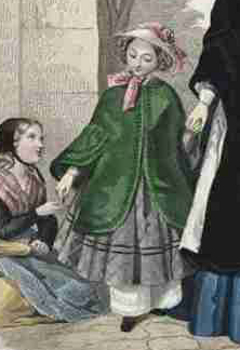 “Mrs Kenwigs, too, was quite a lady in her manners, and of a very genteel family, having an uncle who collected a water-rate; besides which distinction, the two eldest of her little girls went twice a week to a dancing school in the neighbourhood, and had flaxen hair, tied with blue ribbons, hanging in luxuriant pigtails down their backs; and wore little white trousers with frills round the ankles — for all of which reasons, and many more equally valid but too numerous to mention, Mrs Kenwigs was considered a very desirable person to know…” Chapter 14, Nicholas Nickleby, by Charles Dickens, originally published as a serial from 1838-39.

Girls wore various forms of pantalettes until their skirts reached their ankles; somewhere between twelve and sixteen years of age depending on the parent’s outlook and the maturity of their daughter (some girls were married at twelve). Pantalettes were generally decorated down by the ankles and meant to be seen. Leglets, a cuff of lace attached by buttons, was a popular and practical way to decorate the exposed part of the legs. By the 1850s the huge belled dresses ladies were wearing (usually requiring crinoline cages) meant something had to be worn, lest the embarrassment that might accompany a fall or gust of wind; even a staircase or climbing in a carriage might reveal too much. 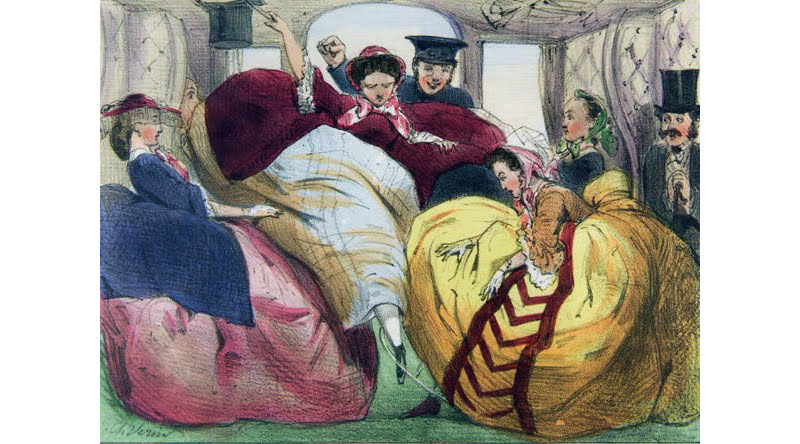 A French ink and watercolour from the 1850s, showing women struggling in a first-class train carriage. The girl in the middle might be about to take an embarrassing tumble. Note that she is grabbing a hat brim cord, these were installed for hat storage in carriages. 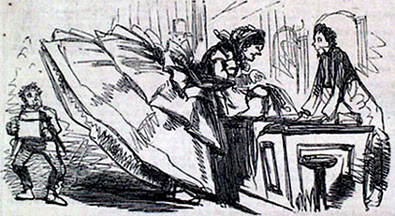 Women who embraced the crinoline fashion craze suffered a great deal of inconvenience in their daily lives and mockery from satirical cartoonists. Another issue for the ladies was warmth, for they had shed layers of petticoats. A great many of the travelling, riding, and walking suits maintained the practical smaller profile with petticoats, and were favoured by many women, Kate Tattersall included. However, to appear at the grand balls or high society social functions, every lady had to possess a few extravagant gowns and, therefore, decent drawers. 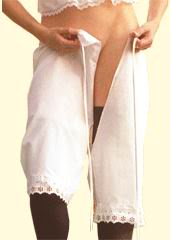 Vintage and Retro by Enchanted Oldies based in Liverpool, U.K., produces Victorian undergarments in poly/cotton blends.

Most drawers for women in the mid 1800s were split leggings and about knee length. Each leg was finished separately and joined together at the waistband only, leaving the crotch seam open, but crafted so there was a bit of an overlap. They usually had a drawstring at the waist and tied or buttoned at the centre back, but sometimes in the front. Drawers were made of various materials, white linen very popular and often trimmed with lace, but plain cotton was the most affordable. Linen held up well in the times of strong lye soaps. It was noted in 1840 that women who rode frequently wore flannel or wash-leather drawers, with or without white calico leglets. For most women, split drawers were a necessity, because with all the layers they couldn’t pull down their drawers to use a chamberpot, much less pull them back up again, particularly when a tight corset was added to the outfit.

The chahut, which began as a rowdy dance for couples in the 1830s and evolved into the cancan by about 1850, may have been one of the reasons little buttons started to be used as an option to hold drawers closed, London usually following the Parisian fashion innovations and trends by about a decade. (The truly risqué dancers wore nothing, and were banned from respectable dance halls.) Many medical men advised against this practise of wearing closed drawers, the belief being women’s nether regions required constant fresh air to prevent dampness and all the dreaded manifestations of hysteria. However, women were wearing trousers on a regular basis, so the doctors were obviously ignored by countless members of the fairer sex who could think for themselves. 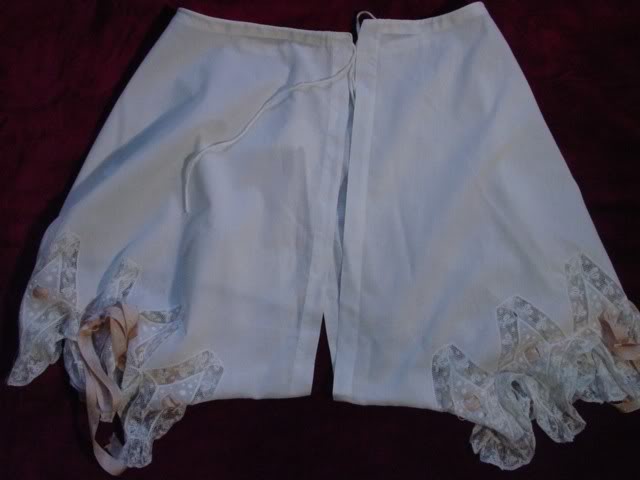 Another influence of the era was the Women’s Emancipation Movement, which included the adoption of “bloomers” starting in the early 1850s, popularized by Amelia Bloomer of New York. Known as “American Dress” and “Reform Costume” by the women who were attempting to have more practical attire accepted in society, combining a form of pantaloons (baggy trousers which tapered to the ankles), and short skirts like youngsters wore. Travellers likened the outfits to similar dress they had seen in the Arabian lands, so to some it was known as “Syrian costume.” Of note, the book I referenced in the second paragraph of this article includes “Turkish Trowsers” for little girls, the pattern looking very much like bloomers, and that was in 1840. The ladies who paraded in public wearing bloomers suffered mockery from newspapers and satirical cartoonists akin to their crinoline opting sisters. However, it was the start of women’s trousers being accepted in society, and by the late 1800s athletic bloomers (more like knickerbockers) were considered quite fashionable and somewhat encouraged for sports and cycling, drawers worn underneath. Obviously ladies did think for themselves, and had garments made to their specifications, adapting costumes and men’s clothes for underwear and outerwear. To be clear, in the Victorian era, bloomers were a type of women’s trousers, not underwear. To read more about Victorian women in trousers click here. 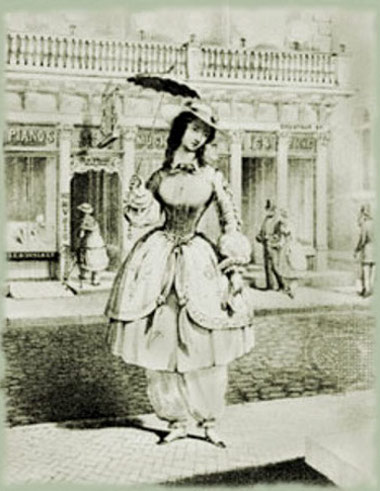 Fashion drawing, early 1850s. She looks lovely, and this would have been an expensive outfit. 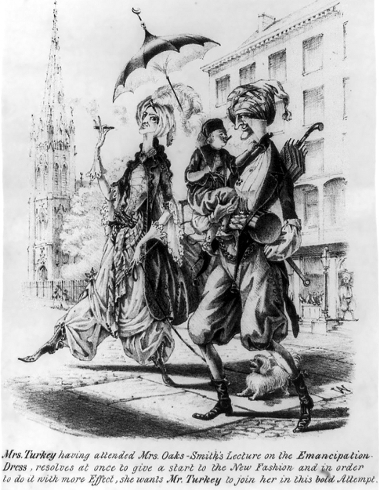 A newspaper cartoon titled “Turks in Gotham” from 1851, it plays up the middle-eastern influence, and makes the characters as ridiculous as possible.

Kate Tattersall did not care for the bloomer fashions, preferring her long skirts and dresses when in society, but she wore breeches (riding pants) on many occasions for practical purposes. (There are examples of women’s breeches made of wool or chamois leather, as part of their riding habits, as early as the 1850s, and became standard by the 1880s.) This probably led Kate to having special under-shorts made. Perhaps these had buttons or a sewn crotch seam? If so, she was a decade ahead of fashion, likely adapting standard split-drawers to achieve her desired garment. (Of course, men’s drawers had buttons, and the somewhat rare women’s pantaloons that went with the Empire dress of the early 1800s did too.) By the 1860s this sort of silk or fine linen under-shorts was available for wealthy ladies at all the best shops, and less expensive cotton versions were mass produced (thanks to the sewing machine) and sold in general stores; short, long, laced, and plain. Split drawers continued to be popular, produced up until the 1920s, ideal for women who still chose to wear corsets. Modern versions of Victorian styled drawers are available for purchase from many sources, made of silk, satin, cotton, linen, polyester, rayon, &c. Today people use the term bloomers for what would have been known as drawers or trowsers, and some retailers market their products as pantalettes.

These mid 19th C. examples from the Metropolitan Museum of Art are typical of the mass produced linen and cotton styles that survive in collections today.

Of interest, to Americans in particular, by 1836 there was already a reference to “knit silk drawers and under shirts” in a Treasury Department Circular signed by Comptroller Mr J. Anderson with regards to import fees. These items are listed among many, some men’s, some women’s, some sundries, so there is no way to be certain for which gender they were intended. Probably both, since manufacturers of what was then known as “ready-made clothing” catered to all, and undoubtedly reveals there was an established market for silk undergarments in the U.S. and customers wealthy enough to afford such luxury. How many years import of this nature had existed is currently unknown, but it confirms that it stretched back before the crowning of Queen Victoria.

Conclusion from this series of articles on early Victorian undergarments, Introduction, Part 1, and Part 2; Kate wore a lovely collection of custom silk “unmentionables” most of the time, although she may have worn chamois drawers for riding. While it would have been expensive she probably didn’t give the cost much thought. Today we have all kinds of materials, but during her life there would have been no finer clothing to put next to her skin. 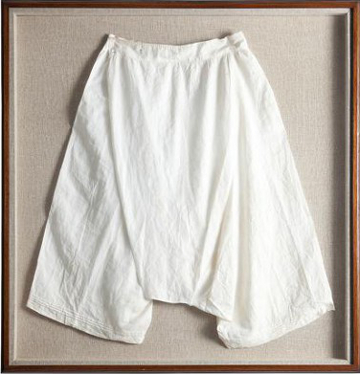 A nice example of Queen Victoria’s silk drawers, sold for £9,375.00 on 1 Nov 2011, Paul Fraser Collectibles. These drawers were made sometime in the 1860s. They appear quite plain, and baggy for the size of the waist.

Note: Pockets were crafted that could be tied into the crotch, suspended front and back by the drawstring of split drawers or from a belt. In the pocket would be inserted a handkerchief or some kind of absorbent wadding. The belt that was worn with straps to hold up stockings could also serve to suspend the absorbent pocket. The first actual patented belted menstrual pad appeared in 1858, known as a Jensen’s catamenial bandage. No doubt Mr. Jensen copied home-made versions to produce a ready-made product for sale in the growing mass produced clothing market.

Trivia: It has been recorded Queen Victoria had fresh, new, hand made, silk undergarments every day of her adult life, so starting around the time she took the throne, 1837. Once removed from her royal body, these garments were cleaned, then embroidered with a crown, the date, and the initials VR, for Victoria Regina, and perhaps VRI (Imperatrix, once she became Empress of India, 1876). Some of her large-sized preserved undergarments are in fact fine linen. It is recorded that she had a 20″ waist when crowned and perhaps a 50″ waist when she died. Waist size is difficult to determine when examining drawers, because they were crafted to tie and overlap, although pairs made with buttoned waists are reliable.