By the 1840s pistols were the weapon of choice for duels in Britain. Learning to properly defend oneself with a sabre took far more practise and skill. It also required physical conditioning, as strength, stamina, and agility, improved one’s swordplay. To take up a pistol, aim straight and pull a trigger, could be reasonably accomplished by anyone. There was an attitude flouted about that swords were for frivolous matters, when “first blood” was adequate to decide a quarrel, and a true gentleman would only engage in a duel when it was worth his life; therefore pistols at close range, a bullet burying itself anywhere in a body generally proving instantly fatal, or from infection. It was probably also a convenient excuse not to stay in shape and spend hours training with a sword master. 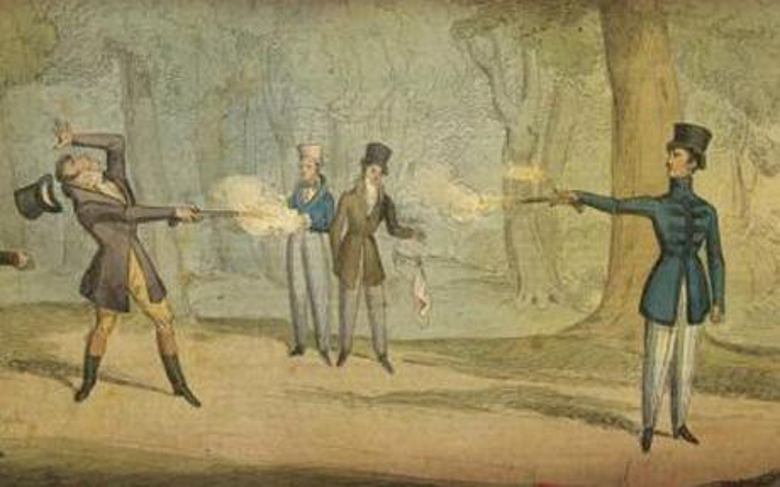 These gentlemen appear to be firing from about six paces at the drop of a handkerchief.

While duelling with sabres seemed to be simple (opponents facing each other on a piece of secluded turf) there were countless variations to pistol duels which would be worked out by the seconds; standing and firing at the drop of a handkerchief, striding towards each other and firing at will, marching to a beat away from each other then turning and firing, &c. Ultimately, it came down to the combatants shooting upon one another at close range, usually once. If neither man was hit and the challenger felt honour had been served the duel would be declared over. If the offended party was not satisfied, a pistol duel could continue until one man was hit, but the seconds and witnesses would often try to prevent further combat. To have more than three exchanges of fire was frowned upon as ungentlemanly and farcical, an embarrassment for both parties. The smooth bore flintlock pistols commonly used up until the 1860s were notoriously inaccurate and prone to misfiring. If duelling had gone on with the rifled barrels which were developed throughout the 19th century fatality rates would have been extremely high, but I suppose gentlemen would have continued to use the old weapons.

Typically, it was the Irish, a people with such a deep love of single combat (whether it be with fists, bricks, sticks, sabres, or pistols), who made the most comprehensive duelling document, known as the Code Duello, written in 1777. These rules were created to make pistol duelling more civilized, but it made some notes about swordplay as well, and how varying degrees of insults should be handled. Every gentleman was expected to carry the code in the case with his brace of duelling pistols.