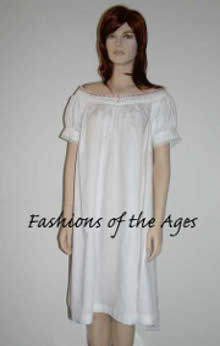 The chemise of the mid 1800s varied a great deal. Most were fairly shapeless, short sleeved, hanging straight from the shoulders, perhaps all the way to the knees, commonly made of linen, the least expensive made of cotton. Chemises were usually crafted without buttons, because women would wear stays or a corset over them. As they served as the bottom layer, the material was woven thin and the garment tailored to fit fairly close to the body. It was the chemise and stockings that were expected to keep perspiration from soiling the outer clothing. I have read names for different types of necklines, but they contradict each other. I have to suppose the clothiers just made whatever a lady asked for. Perhaps in the 1860s, with the increased use of sewing machines, and popularity of ready-made clothes, manufacturers started labelling styles? You can see reproductions of several different versions here: Fashion of the Ages. Kate specifically wrote about her chemises in many of her diaries. How long they were I can’t be certain, but some she describes as small and wearing them with breeches, so they must have been only thigh-length or less. (Lots of women wore breeches under the skirt of their riding habits.) Again, just as with her hose, she preferred silk with lace trim, but also wore linen. As with many wealthy women of the day, she had various lengths and fabric for different occasions. 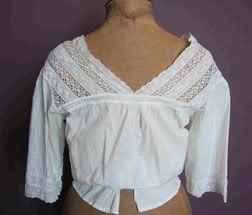 The small chemises may have been similar to this example on the left. Vintage Dress is a purveyor of “desirable, wearable and collectable antique, vintage and modern clothes and accessories” and often has a selection of undergarments. As usual parroting the French in fashion, this style of shirt women began to call a chemisette, a short tight chemise that became popular in the late 1850s as lacy bodies or waists, but a term that was in use as early as 1810. Patterns for chemisettes as bodices were common in British manuals by the 1840s. It’s hard to know what women may have been wearing, mixing up various combinations for hot and cold weather, and comfort. Certainly there was a layer without buttons or much decoration usually comprising of stockings, drawers, and an under shirt, then the stays or corset, then perhaps a bustle, petticoats, or crinoline and cover, corset cover, &c, and then the shirt (whether it be complete or just a bodice with separate collar and under-sleeves), and finally a gown or dress, perhaps a skirt and jacket, pelerine, mantle, &c. It should be noted, the stays or corset was somewhat of a necessity, because all the layers (petticoats) worn beneath the skirt were designed to be tied around the waist or attached to an upper garment by ribbons or buttons, so the overall weight would be transferred up to the woman’s shoulders. As corsets evolved and became strapless, women took more weight on their hips and tighter lacing was required to hold everything up without sagging, but the much lighter crinoline had replaced the layered petticoats in most circumstances. 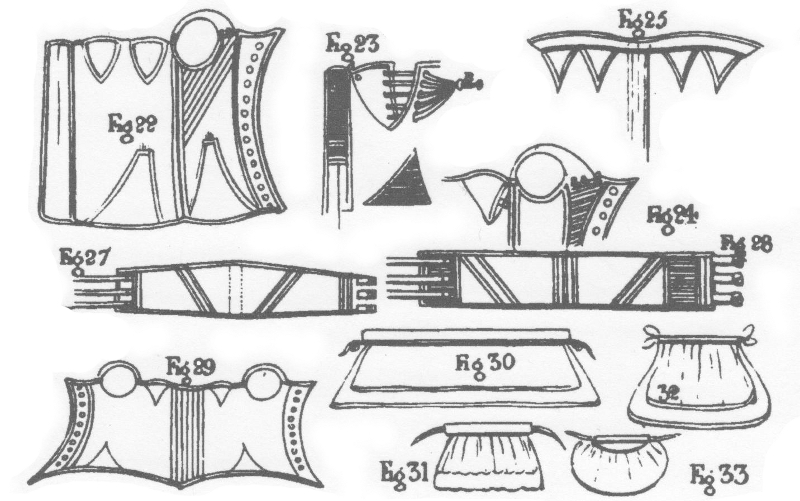 Part of plate 11, showing stays and bustles, from The Workwoman’s Guide, 1840.

Figure 22 is half of a woman’s stay, recommended to be made out of sattine (the predecessor of sateen), or best French jean, put together with strong sewing silk and with as few bones as possible; a steel at the middle of the busk, and bones at the extreme ends to prevent the lace holes from tearing out sufficient. Figure 23 shows the inclusion of India rubber runners at the front gore by the steel for greater elasticity. Figure 24 is a shoulder strap attached by lacing. They could also have buttons at the front. Figure 25 is of a thin modesty piece. Figure 27 & 28 are of men’s stays, for soldiers, hunters, “or by those using violent exercise.” Figure 29 is a complete older child’s stay, recommended to be made without any bones. Figures 30 through 33 show simple bustles, an accessory that all but disappeared when the crinoline became popular. but returned in the late 1860s.

Both sexes of all ages wore snug waistcoats under their shirts and with their night gowns for cold weather, but women had small cropped vests (like a bodice) specifically for swathing their bosom all year round. (This item of underwear is not to be confused with the under-vests, which were worn as a fashion accessory over the shirt, and didn’t cover the bosom at all, buttoning tight around the midriff, often used to accentuate an hour-glass figure.) There are examples of quilted vests that were worn as modesty wraps, hiding the details of a bosom, but also served as a “breast improver” adding some volume. Actual breast improvers were stuffed cups, worn inside a bodice, or built in during the construction of a bodice. Another item worn had the charming name of “bosom friend” and was rather like a bib made to cover the breasts, made of knit wool, flannel, or fur, providing warmth and volume.

The word camisole started being used in England as early as 1810-20. Originally it referred to a small jacket, translating from French as vest. In medical journals the term “camisole de force” meant a strait-jacket for restraining the insane, or those condemned to death. What Kate and her contemporaries of the 1850s referred to as a camisole was more of a decorated tube top with ribbon shoulder straps; like an early bra-like garment. When examining museum pieces, camisoles will not have buttons, because they were designed to be worn under a corset or stays, while corset covers will usually have buttons. 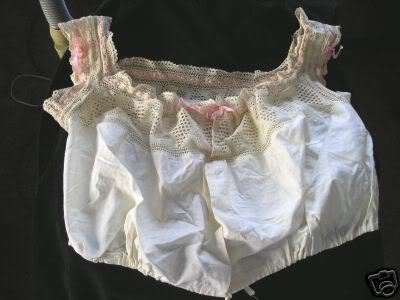 There are many examples, but more from the 1870s or later. This one, listed as an 1850 model camisole, is preserved at the Old Sacramento Living History Museum. Corsets and corset covers were certainly common during the early Victorian period. Kate wrote about donning a corset, but hardly ever tight-lacing. She had been informed by her husband, who was a doctor, that such an article could have negative effects on her innards. However, fashion takes precedence over husband’s opinions, so Kate’s evening gowns and many of her other outfits included restrictive boned bodices (acting like a tight-laced corset). Museums have countless examples of garments preserved in their collections which were worn by wealthy ladies, and required a maid to lace up the back.

There were a great deal of medical men who tried in vain throughout the 19th century to have corsets banned altogether. A search will find hundreds of articles on corsets and the folly of tight-lacing, from the early 1800s right up to modern day. A good example can be found in the Botanico-Medical Recorder, Volume VIII, 1840, where a Dr. Peckham wrote: “If she prefers a tight corset to free respiration, let her not complain of Providence for a sluggish circulation of the fluids of her body, and diseased organs, liver, lungs, &c.” Note it was the tight-lacing that caused the problems, not the corset itself. Due to the volumes of information on the subject I will avoid it, but some points are included in my article about the Victorian Feminine Ideal. In the one photo we have of Kate she doesn’t appear to be wearing a corset, or if she is, it’s not very tight and some type of under-bust model. Likely she is wearing simple stays.

Next, completing her undergarments, drawers and pantalettes.