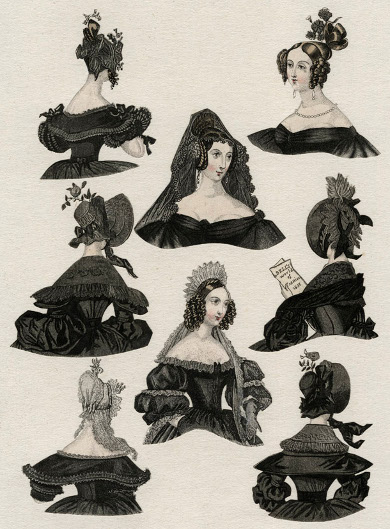 World of Fashion, July 1837, mourning dress for the death of William IV. These outfits are still quite stylish. As the Victorian era wore on the mourning garments became plainer.

Anyone who was wealthy enough to afford it was expected to wear mourning dress when a family member or friend passed away. During the early Victorian era the requirements weren’t as strict as they would become later (after Prince Albert died of typhoid fever, 14 Dec 1861). Full mourning generally lasted a year, but could be as long as two (or even decades), and half-mourning up to a further two. For widows the first year was the most restrictive, with black clothing and isolation. The materials used for mourning attire were dull, crêpe being silk but not shiny, and black piping would edge shirt cuffs and collars, along with black buttons. There was an expensive kind of very rich jet black silk (most other black silk being the darkest midnight blue) worn only by widows that was known as widow’s silk, the outfits known as widow’s weeds. Weeds evolved from the Old English word waed, which roughly translates as garment. If white gloves were worn, they were stitched with black thread, and could be trimmed with black piping on the backs and cuffs. Jewellery was often made of jet and cameos had dark profiles instead of light, and black pearls were used for pendants. People wore black all the time, the difference for mourning was the plain styling and dull fabrics used, and black trim applied to any white article of clothing. Shiny silk top hats were wrapped with dull black crêpe. Having the money to afford proper mourning dress and accoutrements became a status symbol, with tailors and entire warehouses devoted to the fashion by the late 1840s, where a shopper would go to the “Mitigated Affliction Department” for half-mourning. 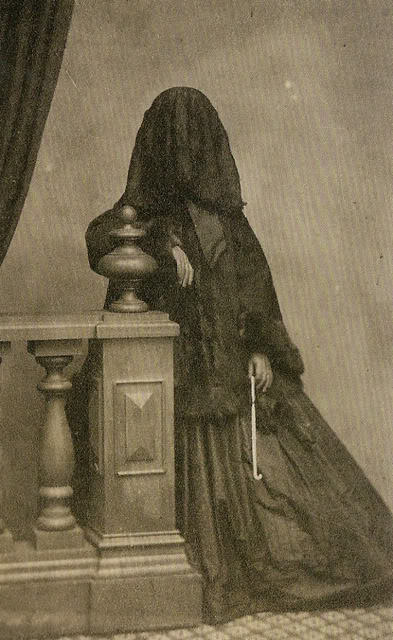 After a year widows were allowed to attend social events, and if they became engaged to a new companion could shed their drab attire. Some women were engaged within six months after the loss of a spouse, and it wasn’t entirely frowned upon. If a husband had been away for years, a soldier, or sick for a long time, widows were accepted back into society after half a year. Many young widows were expected to move on quickly, particularly if money was an issue or children needed a father and provider. If not, it wasn’t until reaching half-mourning that widows would start to wear shades of grey and lavender (purples), and partake in social events. These rules became stricter as the 19th Century wore on, and Queen Victoria remained in mourning decade after decade.

As outlined in “The Workwoman’s Guide” published in 1840: Mourning for a parent was six months or a year. For children, if above ten years old, from six months to a year; below that age, from three to six months; for an infant, six weeks and upwards. For bothers and sisters, six to eight months. For uncles and aunts, three to six months. For cousins, or uncles and aunts, related by marriage, from six weeks to three months. For more distant relations or friends, from three weeks and upwards. A particular kind of ribbon was worn in mourning, and was called love ribbons, and could be either black or white. This was a very plain gauze ribbon, without any pattern on it but stripes. Children, who were in mourning for children, frequently wore a great deal of white, like white ribbons applied to hats, hair, button holes, &c., and white handkerchiefs, gloves sewed with black, and for very young children white frocks with black ribbons. 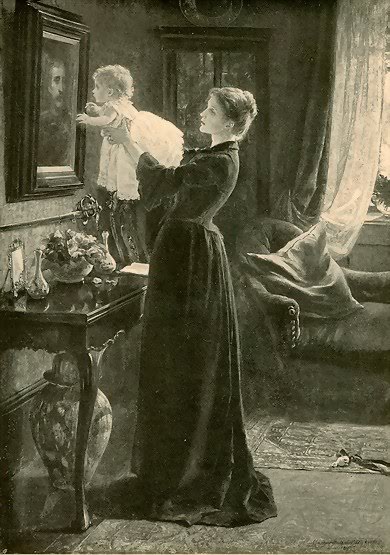 A young widow shows her child a portrait of a lost husband and father. He appears to be clad in uniform, so perhaps died in combat. “In Memoriam” by Margaret Isabel Dicksee (1858-1903).

It was usual for persons of large fortune to put their servants in mourning. At the death of the heads of the family, their parents or children, the deepest mourning was as follows: For women servants, one stuff* or bombazine gown for best, and two black print or working gowns, a bonnet made of black silk and trimmed with crêpe, muslin for collars and caps, a black silk handkerchief, black stockings and gloves. For men servants, a complete suit of dress and common livery (of stuff or bombazine), with black hat-bands and shoulder-knots, black gloves and stockings.

Military men would merely wear a piece of crêpe, between “two and three nails”** deep, folded round their left arm below the elbow. This location would have worked well, because of the intricate cuff trim of the tunics, and the location of rank on the men’s tunics. At some point later in the century this was moved above the elbow, and adopted with civilian attire as well. Deepest military mourning for officers included black crêpe neck scarves, black sword knots, and rosettes of black crêpe.

The one striking variation to all the dull black was for funerals of young girls. At these sad occasions people wore a long white silk hat-band tied in place with a white love ribbon, and women had the further option of a white silk hood. The band or hood of white obviously represented the purity of the girl. I don’t know when this custom ceased. 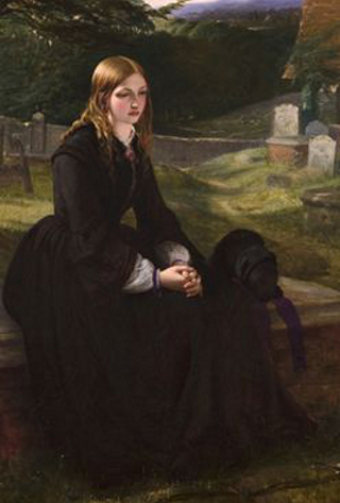 Purple armbands and trim were also worn, and to commemorate Prince Albert’s death a bartender at Brook’s Club in London created a beer cocktail of champagne with stout on top, named Black Velvet. The different densities of the liquids keep them separate, but a layer of purple forms between them. The black beer and purple symbolized the mourning armbands. At Queen Victoria’s court, the entire household was almost always in full or half-mourning for someone, due to relations with all the European Royalties who died regularly. However, birthday celebrations and weddings suspended mourning observances, allowing a return of fabulous brightly coloured shiny silk gowns and suits.

Note: The black dyes were unstable, and could not be worn next to the skin as perspiration and natural body oils would cause the colour to blotch and run. It was this reason white shirts were worn but trimmed with purple or black lace, ribbon, or piping.

Note: Crêpe (also spelt crape), poplin, satin, velvet, bombazine, taffeta, and chiffon, were all different weaves of silk, and generally only purchased by the wealthy who could afford such luxury.

* Stuff was a term for a woven wool fabric.

** A nail is two and a quarter inches, so probably five to six inches was common, which is quite deep. The male mourning band worn on the upper arm later in the 1800’s was less deep, about four inches.

A Missing Purse0 Comment(s)
Ghost in the Gloaming1 Comment(s)
Reconnoiter & Request4 Comment(s)
" This is actually really helpful. "~ F.Y.S
" Cool "~ Lillie Pepper
" What a different Website. I design Walking Canes and I have... "~ Antony Andrews
Loading Comments...