There were some surprisingly good handgun designs by the early 1850s. While many of the finest were produced in London, an outstanding model was designed and manufactured by Samuel E. Robbins and Richard S. Lawrence of Windsor, Vermont, from about 1851 to 1854. A total of about 7,000 of these pepperboxes were turned out in three variations and two calibres. With this example the barrel hinges down for loading, a great advancement over muzzle loading. 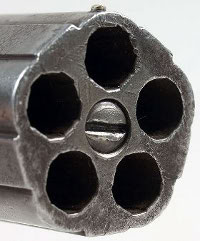 However, with this model, the finger ring rotated the striker, and then the trigger was pulled to fire; a little clumsy. The barrels were ribbed, not rifled, so accuracy was still an issue. It was generally held that if it came to a fight with pistols the combatants would be almost on top of each other, so having several shots was more important than being precise with aim. For the first half of the 1800s, pistols were all single-action, meaning the hammer had to be cocked by the shooter, then the trigger was pulled to fire. Robert Adams (1809-1880) patented a double-action trigger in 1851. This allowed the shooter to advance the revolver and fire the weapon by just pulling the trigger. Models were crafted with hammers that could still be thumbed into a cocked position, but also with only the option of pulling the trigger; the hammers/strikers designed to lay flat or be housed internally.

Note the small calibre of this Remington model, and how the hammer lays flat. 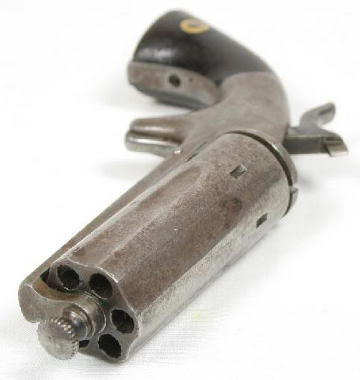 Quite a different style barrel mount, but a traditional hammer, Bacon Arms Co.

What did all these weapons have in common? As Mark Twain observed in the account of his adventures in the American West, based on his experiences from 1861 to 1867, Roughing It (1872), “even ordinary five or five-shot pepperbox revolvers had atrociously long and stiff trigger-pulls inevitably resulting in great inaccuracy, and they were highly liable to multiple ignition.” I’m sure that observation would also apply to six, seven, or eight-shot models as well. Multiple ignition could be disastrous, sometimes causing the weapon to shatter, and remove the hand or kill the unfortunate shooter.

All these models were using charges and percussion caps, so moisture was still a problem, causing misfires, until the invention of cartridges. It is easy to surmise, a multiple shot, smooth triggered, accurate handgun would have been a huge advantage in a melee. This will be examined in Part 3.